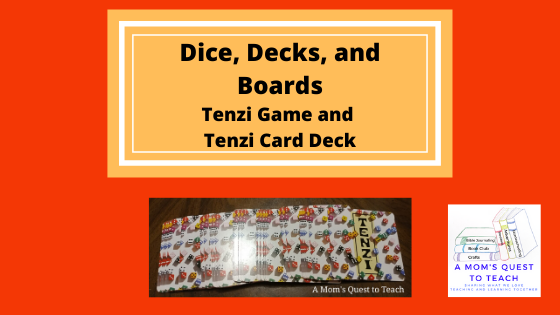 I received a FREE copy of this game and game deck from Timberdoodle in exchange for my honest opinion. I was not required to write a positive review nor was I compensated in any other way. This post contains affiliate links. For more information, please see my Terms of Use and Disclosure Policy page. Thank you. 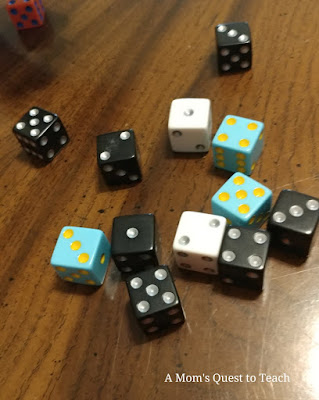 Our family loves dice! One of the items I have had on my wishlist at Timberdoodle is the Tenzi Game (which is part of the second-grade curriculum kit). So, I was very excited when the opportunity to review the game and the card deck became available. It actually arrived just in time for our younger son's birthday so it was like a present for the whole family. 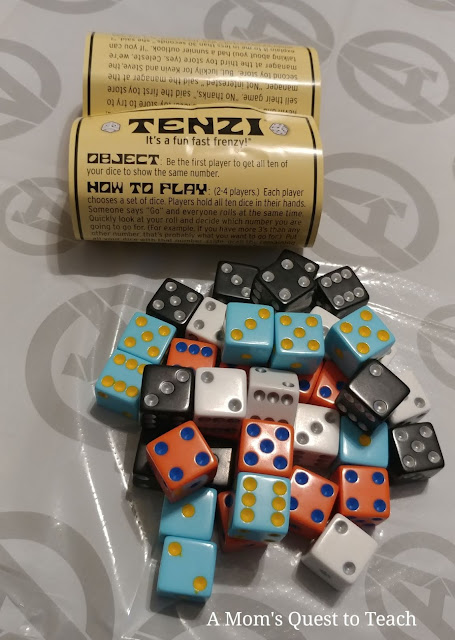 What Exactly is Tenzi?


Tenzi is an award-winning game that is fast-paced and easy to learn. Each game contains forty dice (10 each of four different colors). One set can be used by four people to play the original Tenzi game. How do you play? Players roll all ten of their dice in order to display ten identical numbers. They keep rerolling until all ten of their dice are the same number. Add in the Tenzi Card Deck and you will find 77 Ways to Play Tenzi (including a couple more ideas that are including on the rules that come with the original set of dice).

With so many different ways to play Tenzi, you can easily fill a game night with just two simple purchases: the Tenzi game and the card deck. On the evenings where we played Tenzi, we played at least six or more games and used the cards to shake up the rules. I think one of our kids' favorites was where you had to make a sound like a farmyard animal after each roll (Farmzi). It was very loud in our dining room during that game! 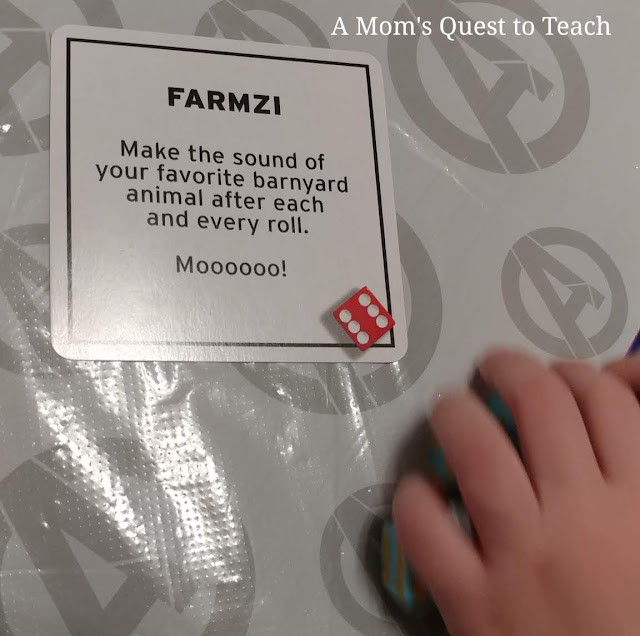 We started with playing the regular Tenzi game and then moved on, trying our hand at different versions based upon the card deck. For example, we played Oddzi & Endzi where we had to roll any combination of only 1's, 3's, and 5's. This is a great way to teach or refresh children's memories of odd and even numbers. We also played Clapzi (one claps after every roll), Sixty-Fourzi (you need to roll six 4's and four 6's), and Fivezi (using only five dice), among others. The first night we even ended our gaming session with one where the last one to get Tenzi cleans up the dice. 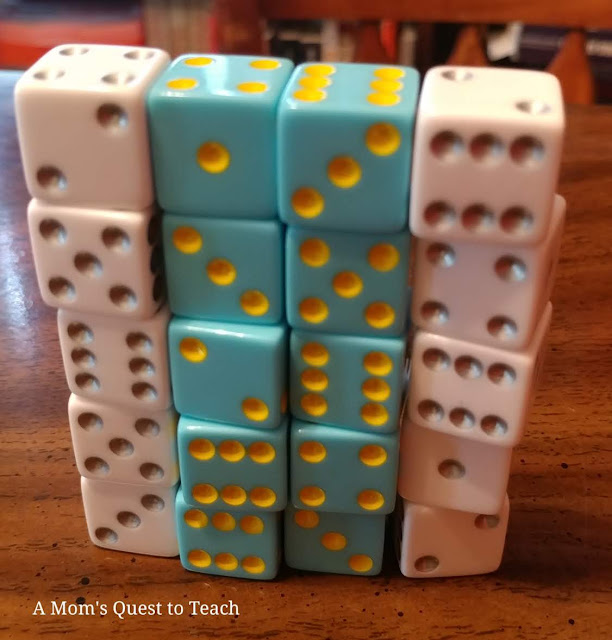 
The Tenzi dice have pips – not numbers on them – which encourages your child to count. If you have other six-siders you might have dice that have numbers printed on them rather than the pips. This can give an unfair advantage (or at least that is what my family said when I was using extra dice so I could play as the fifth person).

I think the dice are well-made and I didn't feel as if any were loaded – or at least I couldn't tell as I was rolling the dice so many times. The pips were all drawn/painted on clearly so they were easy to read. 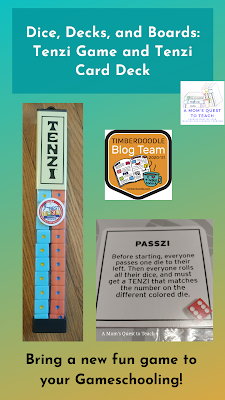 
There is nothing quite like forty (or more) dice rolling at the same time as everyone tries to get their match. For a few moments – at the start of each game – there was silence (which is quite amazing considering there were five of us playing ranging in age from five years to adult).

We loved Tenzi so much that we bought an additional set so all five of us could play at the same time (without raiding our other dice bags). I could easily see this as a game that we take with us to friends' houses for game night. It is easy to transport and simple to explain while still being really fun.


While I love the package for display, I think we will probably buy a dice bag to hold all the dice in so that they don't get lost. Depending on the size of the dice bag, we might even be able to keep the card deck in the bag, too.

I would highly recommend Tenzi and the Tenzi Card Deck! It was easy enough for our five-year-old to understand and play but exciting enough that our teen loved it. There a few cards within the Tenzi Card Deck that we won't be able to use with our youngest (due to dexterity needed or ability to calculate numbers) but – in general – everyone can play this game and have great fun!


We have also reviewed other fun and educational products from Timberdoodle including: 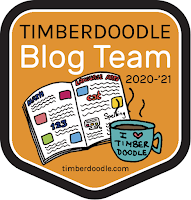