Book Club: A Study in Sable by Mercedes Lackey 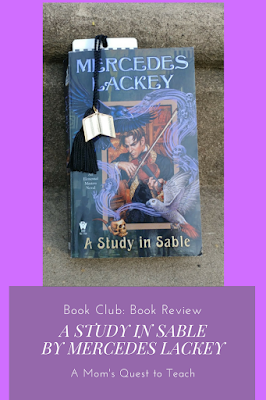 Over the next several years, I would find all the books available in the Valdemar series as well as other novels by Mercedes Lackey. Some of my favorites of Lackey have included:
One of my favorite books was The Fire Rose and the books that were part of the Elemental Masters series. (Technically The Fire Rose is not part of the series, although some list it as part of the series. It is a retelling of Beauty and the Beast and magicians. Since the story of Elemental Magicians is in both that book and the series, I think of them in the same world.)

Then time passed, the books seemed to be less interesting and Mercedes Lackey wrote books in other series that I didn't enjoy as much. So while I kept reading the books in the Valedmar series and the Elemental Masters series, I did not enjoy them as much as previously. Where I used to be able to read a book in a few days, it now took me weeks to complete of her works. So I stepped away from her books. I even put them all away off my shelves. 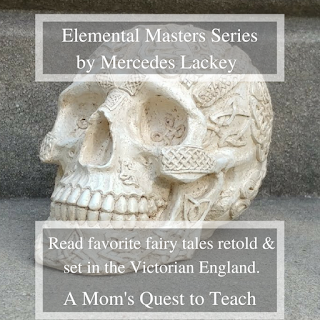 But then my husband bought A Study in Sable for me (an Elemental Masters Novel). I set it aside, picked it up to read, set it aside again, and finally decided I would make time for reading it. While it took me a few days to get back into the story of Nan and Sarah, I was so eager to find out what was happening by the sixth chapter that I stayed up until 4 am finishing the book!

While there were parts that confused me - like why was the young man walking around the Thames at low tide at night — the majority of the book was highly enjoyable. And everything was resolved clearly by the end of the book. It did seem to stretch a bit out of the normal retelling of a fairy tale (but seems to be becoming the norm for the Elemental Masters series).

Other retellings in the Elemental Masters series include:

This story brought back Nan and Sarah from The Wizard of London and introduced Sherlock Holmes and John Watson to the world. If you haven't read about the girls, they are not Elemental Masters themselves but posses the ability to read minds, read objects, speak to spirits, and channel spirits with the help of their two birds (Neville the raven and Grey the African Gray Parrot).

Throughout the book, Nan and Sarah help John Watson and his wife, Mary, who are Elemental Masters, on a number of tasks. They also revisit a scary place from their childhood — Number 10 Berkeley Square. New characters are introduced like Suki, who possesses similar skills to Nan, and we see Sarah as she attempts to rid a hotel room of its ghosts. The central focus of the story is Sarah's attempt to help the Prima Donna Magdalena who appears to be the focus of these ghosts. Throughout the tale Holmes is involved as he is looking for a lost sister and searching out secrets for other cases.

I recommend this book for fans of Mercedes Lackey and I have already added the next two books in the series to my wishlist! (I will be looking for A Scandal in Battersea at my library this week.)

Do you have a favorite author who retells classic fairy tales?