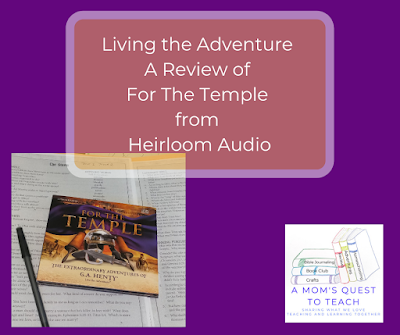 Similar to the other two Heirloom Audio productions (Wulf the Saxon and St. Bartholomew's Eve) we have reviewed, For The Temple opens with a chance meeting between G. A. Henty and Peter, leading to the opportunity to share the story. We are then taken back to the days when Rome still controlled the land of Israel. Our main character in this tale is John of Gamala who becomes a hero to the Jews and an enemy to the Romans.


G. A. Henty is a great storyteller. He wrote over 100 works of historical fiction including ones about the French Revolution, Ancient Egypt, India, events in England, and the destruction of Jerusalem – which is the central focus of the story, For The Temple. The book For The Temple: A Tale of the Fall of Jerusalem was first published in 1888 and is available through numerous sources today in print. Henty writes in the Preface of the novel:

"I have endeavored to present you with as vivid a picture as possible of the events of the war, without encumbering the story with details and, except as regards the exploits of John of Gamala, of whom Josephus says nothing, have strictly followed, in every particular, the narrative of the historian."

This is partly what attracts me to the work of Heirloom Audio. They are providing their listeners with tales by an author who seeks out historical facts to tell his works of historical fiction. Henty novels bring the stories to life and Heirloom Audio brings the work to life even more through the use of actors, music, background noises, and special effects.


The authenticity of the adventure. It is brought to life by the background noises included, making it more than just a story being read aloud by a narrator. There are sound effects that include the sound of feet walking on dirt, water slapping the sides of a boat, clashing of swords, and more.

The acting of Brian Blessed as our narrator, G. A. Henty, Joseph Reed as John of Gamala, Julian Rhind-Tutt as Josephus, and others help bring each character to life taking us on a great adventure of the relationships between the Jews, Romans, and others—as well as the importance of defending one's nation.

This time, we were able to use a study guide provided by Heirloom Audio. We received a PDF of the study guide. I really like that the study guide provides questions both for listening comprehension (to check whether or not your children have listened to each track) and for helping you take the story further with additional research, critical thinking, and even geography-related questions. 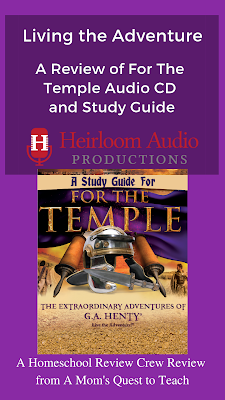 The inclusion of vocabulary with each set of questions would also be helpful if you wish to use them for spelling lists. In addition to vocabulary, some of the sets of questions have drawings or maps accompanying the questions.  And the end of the study guide provides one with Scripture to further study in order to truly understand that there is only one savior.

My only complaint about the study guide is the design of the pages. They mimic parchment paper and this makes printing them out in black and white appear gray and could be difficult to read for some.

As I was listening to For The Temple again while writing this review, our three-year-old daughter was sitting with me. Each time there was a battle scene, she wanted to know what was going on and who was winning. The sound of the fighting and the screams of battle attracted her attention each time. (And later on so did the sounds of John and Mary's baby.) So even though she may not really understand the whole story, we are able to discuss some of what is going on as I listen to For The Temple.

How We Used For The Temple


I listened to For The Temple prior to giving the CD to our teen son. He then was assigned certain pages from the study guide to accompany his listening of the tale. We were then able to discuss the story in more depth.

In the future, I would like to have our teen read the original book and my husband plans on listening to the story with our teen on their next road trip (like they did when we were reviewing St. Bartholomew's Eve).

The review of this great Christian audio drama provided the perfect diversion in our Bible and History studies. I was happy to include it in our homeschooling lessons for the past two weeks. 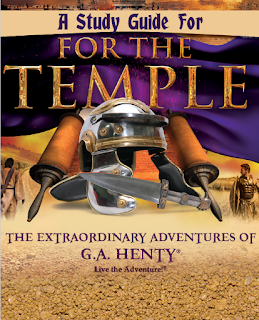 
Heirloom Audio presents itself with many opportunities to take it further than just listening to and discussing the work of Henty. In this specific case, we were also given the study guide to review and use with our family. And as typical with most things, I jotted down ideas to study and research more should our children be so inclined. Here are a few of the ideas that we may pursue further:


Despite the destruction of the Temple, the tale is not over. The study guide reminds its reader that it is the end of the Old Covenant. Followers of Jesus started to be seen as a dangerous new force within the Roman Empire. Times would continue to change providing for more tales from G. A. Henty and Heirloom Audio.

If you wish to see what our family thought of other Christian audio dramas from Heirloom Audio, please check out my reviews of Wulf the Saxon and St. Bartholomew's Eve.


For more information about Heirloom Audio, please visit the following:

Other members of the Homeschool Review Crew were also given the great opportunity to review For The Temple, be sure to check out their reviews, too! 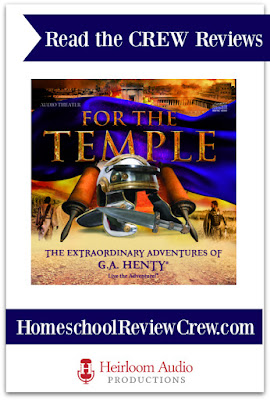