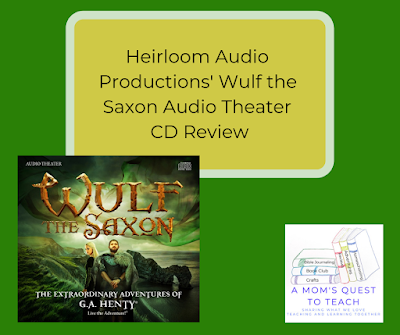 I am reviewing the newest release from Heirloom Audio Productions which brings to life the story of G.A. Henty's Wulf the Saxon.  It tells the tale of England before the Battle of Hasting and of the battle itself.

On their website, Heirloom Audio Production states "we are especially passionate about bringing real history to life." 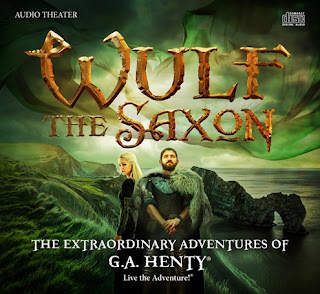 I love this!  As a former teacher of history and a lifelong lover of all things history-related, I really appreciate a company that wants to bring history to its clients.  The stories they have chosen to share provide us with examples of "virtue and valor, daring and determination, character and courage."  Too often heroes and heroines have been removed from history books today.

Wulf the Saxon, written by G. A. Henty in 1895, tells the tale of a Saxon thane, Wulf of Steyning, loyal to King Harold Godwinson. The adventures of Wulf culminate at the Battle of Hastings.

Born in England in 1832, George Alfred Henty would live a life of adventure.  He was a sailor, fighter, and war correspondent -- and traveled to India and America, among other places.  Throughout his life, he would write over 120 books that would focus on the "moral values of loyalty, courage, honesty, and perseverance." (For more on Henty, see Heirloom Audio Productions' article, Just Who was G.A. Henty?) His stories make for great audio dramas for families with older children and teens. 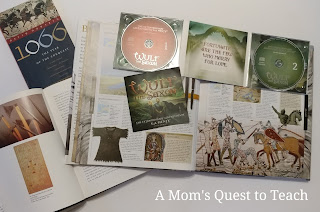 I was very excited to see the cast of Wulf the Saxon. Brian Blessed, with whom I am familiar due to the Blackadder series and the movie, Flash Gordon, brings Henty to life in this audio drama.  Blessed engages the listener much like Henty did his readers in his original tales.

It was also fantastic hearing Helen George portray a character different from that of the midwife she plays on Call the Midwife in the early years of the series.  Her Lady Edith was loving, generous, and selfless; putting her kingdom before her own needs.

Audio theater is not just a reading of the book but similar to a radio play in that the story is told through acting rather than just reading. Joining the actors are sound effects and with your imagination the scenes come alive. You could almost feel the spray from the water when Wulf is sailing during the storm. Or see the sparks as swords clashed at the Battle of Hastings.

To help my fifteen year-old stepson place Wulf the Saxon in its place in history, we pulled several books from our shelves.  We looked at pictures of the Bayeux tapestry, mentioned at the beginning of the audio drama, as well as photographs of spears and axes that were popular weapons of the day.

I asked my stepson some questions after he completed listening to disk one: What do you think it might feel like sitting in the middle of the night waiting for an attack? Should they attack the castle without the approval of their superiors? What would his recommendations be to the men scouting the castle? What might explain their feelings about fighting women?

The end of disk one leaves us on a cliffhanger. Personally, I couldn't wait to see what happened next in the story. Would they storm the castle? Would they be cautious?

After listening to disk two, my teen and I discussed Lady Edith's sacrifice and what we could learn from her willingness to put England before her own happiness. We also talked about Lady Edith's ability to find Harold at the end of the audio drama. The idea that love is something that binds people together is a wonderful concept to be able to discuss with my teen.


The music, the sound effects, and the acting are superb. I would recommend Wulf the Saxon to anyone whether they are a fan of history or not.

If you enjoyed the Wulf the Saxon audio theater, then be sure to check out the Live the Adventure Club. A club membership includes three 2-CD sets shipped to you, access to over 500 old-time radio shows, educational and teaching resources, and more!

Where to find more information: