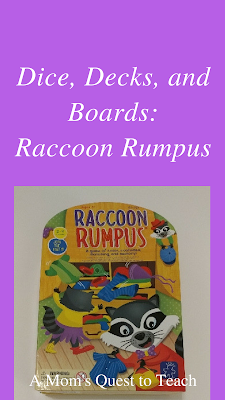 This is a non-sponsored post. I am sharing my opinion with you regarding this product because we have enjoyed it in our household. Affiliate links are included. 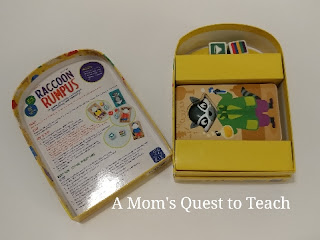 One of the games my children recently received as a gift is Raccoon Rumpus by Educational Insights. It is a "game of color, costumes, matching, and memory!" for two to four players of ages 3+.

The game includes four raccoon cards, twenty costume cards, one jumbo color die, and one jumbo costume die. The English instructions are printed on the inside of the box lid, which is great because it makes it hard to lose them.

There are two games ready for your children to play.  The main game requires you to roll both dice and collect costumes for your raccoon.  The second game is a modified memory game using only the color die. 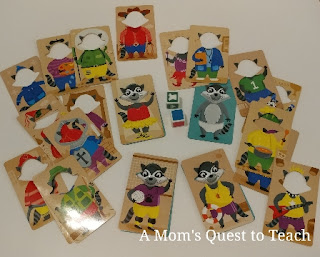 We have played the featured game several times as a family and enjoyed it. My four year-old has even played the main game by himself and had fun.

The raccoon cards are nicely produced along with the rest of the materials.  My only note is that the games might last a longer time than some children's games because one might roll and need to remove all their costumes several times.  (The object of the game is to be the first to collect five costumes on your raccoon.)

I would recommend this game to families with young children.

Posted by Kristen of A Mom's Quest to Teach at 2:06 PM