A is for Andersonville (Blogging Through the Alphabet) 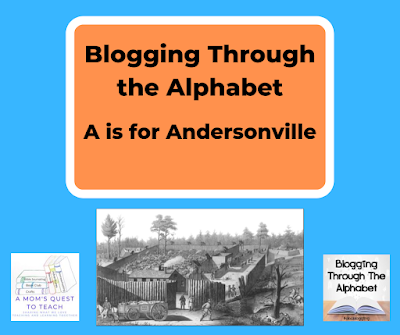 There are many horrific events and locations connected to the American Civil War including those places in which soldiers were kept as prisoners. Andersonville, Georgia (officially called Camp Sumter) was known as one of the worst places for Union soldiers to be imprisoned during the Civil War.

In 1864, Camp Sumter was built in Andersonville, GA to house the Union prisoners. The Confederate government made the decision to move all the prisoners who were being housed in and around the capital of the Confederacy, Richmond, to a location that would be more secure (especially as the Union was pushing closer and closer to Richmond). 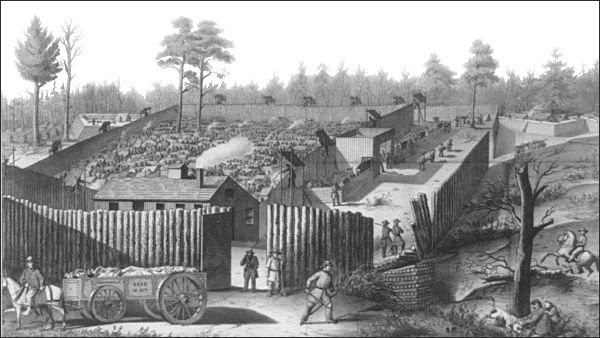 Andersonville was in existence for a mere 14 months but housed 45,000 Union soldiers with approximately 13,000 of them dying due to disease, malnutrition, exposure to the elements and other causes. It grew in size from the original 16.5 acres to 26.5 acres in an attempt to accommodate the growing number of men being held there during the final years of the Civil War. The prison was enclosed by a stockade wall. About 19 feet from the wall was the 'deadline' which prisoners were forbidden to cross. This restriction was to prevent prisoners from trying to climb over the wall or tunnel out. If a prisoner was found crossing the deadline, one of the guards in the sentry boxes or 'pigeon roosts' was allowed to shoot them.


Even though part of the reason of moving the men to Andersonville was to provide better house and access to food and water, these things would not actually occur. There was only one source of water for the prison - a branch of Sweetwater creek - and with rations in dwindling supply for the rest of the Confederacy there wasn't much left for Union prisoners. The economic conditions in the Confederacy were poor—namely, a lack of transportation and materials—and the government needed to supply its army. 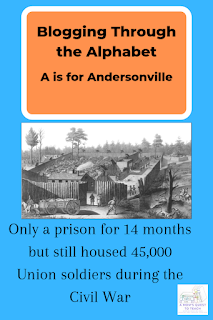 In early August, it is written that 3 surgeons attended the men at the prison and found 27,000 men imprisoned in a 25-acre enclosure, half of which is swamp land. There were 75 to 100 men dying daily. Those that were surviving had no shelter of any kind and their overcoats and blankets were taken away from them. In the field hospital at the prison there were 600 men with no medical attention.

In a letter to Major General John H. Foster of the U.S. Army, Stewart L. Woodford shared that the men at Andersonville were suffering and requested to be exchanged:

"The privates received by me yesterday unite in describing the condition of their late comrades at Andersonville as being pitiful in the extreme. They state they are but half fed, that they are naked, suffering, sick, and dying." (August 17, 1864, The War of the Rebellion)


Operating at Smaller Capacity and the End


When General Sherman was moving through Georgia, the Confederacy moved the majority of the prisoners to other camps. Andersonville then continued to house less men until the end of the war in April 1865. With the end of the war, there came the arrest of the prison commandant, Captain Henry Wirz. He was charged with "murder, in violation of the laws of war." After being tried and found guilty, he was hanged on November 10, 1865. There is a monument erected to him by the United Daughters of the Confederacy.

Unfortunately, there was suffering on both sides during the American Civil War. Neither a Union prisoner or a Confederate prisoner had an easy time of it as he awaited his release. It has been estimated that over 190,000 Northerners and almost 215,000 Southerners were captured and confined with over 30,000 Union and 26,000 Confederate prisoners dying during imprisonment. From poor conditions to poor administration, there were many reasons why hardships awaited the lives of the Civil War prisoner.

Looking for more about the American Civil War


Be sure to read my posts about Robert E. Lee, George B. McClellan, and Ulysses S. Grant. I have also shared information about several battles including Antietam and Gettysburg. 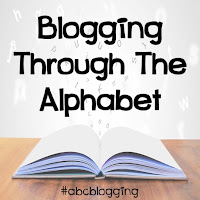 You are invited to the Inlinkz link party!
Click here to enter
Posted by Kristen of A Mom's Quest to Teach at 12:26 PM