Blogging Through the Alphabet: I is for Inflation and Financing the Civil War 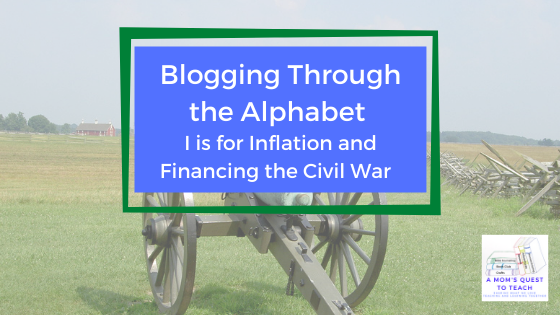 War is often at the mercy of money. The splitting of the United States during the American Civil War led to the two sides facing a variety of problems. The Confederacy's capital was tied up in land, slaves, and planters in debt. And while the Northern economy had fewer problems, they pretty much came to a halt in 1861 as there was a panic that caused a run on banks.

There was no tradition of paying taxes in the South as there were not a lot of pre-Civil War taxes. Even though taxation would be the least inflationary method, it was also the least appealing way to Southerners to raise money to pay for the War. Although a direct tax on property became law, few Southern states actually paid the money to the Confederate government.

One of the ways how the Confederacy financed the Civil War was by printing notes. There were large quantities of paper dollars in circulation. As soon as the paper dollars were printed, their value dropped. There were also counterfeit notes printed in abundance in the South. The funny thing is some could be identified as counterfeit because of the superior printing quality.

The victories in the South led to confidence in the economy, but the continual printing of new notes led to problems. By 1863, it would take $7.00 to buy what it only took $1.00 to buy two years earlier. Who was most impacted by inflation? The poor were those who were most impacted by this inflation, and the divisions between classes widened in the South. 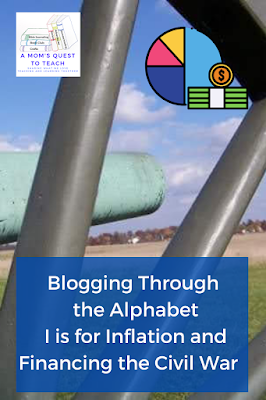 Two of the economic advantages the North had during the American Civil War were an established Treasury and revenue from tariffs, but there were problems. When Abraham Lincoln became president in 1861, the United States had the highest national debt in forty years. His Secretary of the Treasury, Salmon P. Chase, set forth to make changes that would help the North finance the war.

The idea of war bonds is something that is commonly associated with World War II. But during the American Civil War, they would also be sold, and (different from other war bonds sold in America's past), they would be sold to ordinary people, not just corporations. There were several different types of war bonds issued during the Civil War. (Read more here: Museum of American Finance.)

Another thing that is very common today was collected during the Civil War for the first time in American history. On August 5, 1861, the first federal income tax was collected, but most wage earners were exempt from it. Only those earning more than $800 would pay the 3% tax. Lincoln's tax law was repealed by Congress in 1871, but the system in use today would come with the 16th Amendment.

Many of the other ways in which the North would raise funds for the war effort are still in place today or, at least, in similar ways. For example, the Internal Revenue Act of 1862 was passed to help raise more funds for the American Civil War. The Act placed taxes on various luxury items and taxes on other things in the North, such as:

During the American Civil War, the South faced blockades, invasions, and a flood of paper money. They were an agrarian economy not equipped for war, while the North did have several advantages economically. There were huge discrepancies economically and how the two sides financed the war. While the Union had about 80% inflation, the Confederates had 5000 to 9000% inflation. So when comparing the two, those living in the South were impacted more by inflation than those citizens living in the North.
Desiree @ Our Homeschool Notebook
Chareen @ Every Bed of Roses
Posted by Kristen of A Mom's Quest to Teach at 1:47 PM