Blogging Through the Alphabet: J is for Johnston 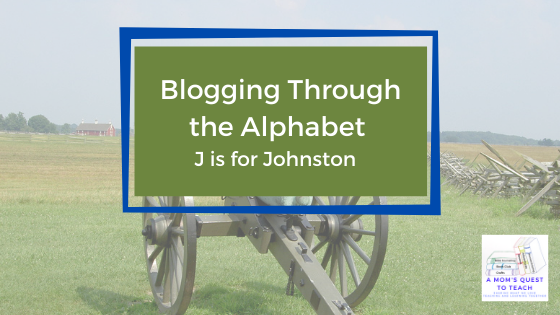 Albert Sidney Johnston was no stranger to military life before the first shot was fired upon Fort Sumter. He had fought for both Texas and the United States against Mexico, and he spent time in the West before his home state of Kentucky seceded from the Union. He has been described as tall, posing a sense of humor and quiet authority. Jefferson Davis is quoted in a book by Shelby Foote as saying that Johnston was "the greatest soldier, the ablest man, civil or military, Confederate or Federal."

Johnston was one of several generals of the Confederacy serving in the Western Theater of the American Civil War. Forts were relied upon in the West to protect the Confederacy against both land and river-borne invasions by the Union. These forts would be hotly contested. In this post, I will discuss Johnston and two forts – Fort Henry and Fort Donelson.

As one of the weakest points in Johnston's long defensive line in the West, Fort Henry was attacked on February 6, 1862, by Brigadier General Ulysses S. Grant and Flag Officer Andrew H. Foote. While the Confederates put up a fight against the Union gunboats in the river, they eventually surrendered. After this capture, Grant said he would capture Fort Donelson on February 8th. With the coming bad weather, an attack on Fort Donelson had to be postponed, but Grant's men were still in a position that separated Johnston's men.

What to Do Next?

Johnston really had two options available to him. He could concentrate all his men (about 35,000) at Fort Donelson and maybe counterattack to get Fort Henry back into Confederate hands, or he could give up Kentucky and focus on the defense of the factories and depots in Nashville. So, would Johnston try to defend Fort Donelson on the Cumberland River and perhaps get Fort Henry back (situated on the Tennessee River), or would he retreat to save the men for another day?

Albert Sidney Johnston preferred to retreat to the Nashville-Memphis line and leave only a small fighting force at Fort Donelson. This would save the Confederates under this command to fight another day. This was a very good plan, but he abandoned it. He decided to make a real fight at Fort Donelson, but he only kept 12,000 of the Confederate soldiers at the Fort. The rest retreated to Nashville. And John Floyd was appointed to defend Fort Donelson (just so you know, General John Floyd was sent to the west after he had problems in Western Virginia).

What picture comes to mind when you hear the word "fort?" Personally, I think about a well-defended military position with solid walls surrounding barracks, common areas, storage areas, and more. Fort Donelson was actually just a stockade of around 15 acres of soldiers' huts and equipment sheds. There were two batteries of 12 heavy guns dug into the side of a 100-foot bluff on the Cumberland River to stop attacks by water. Add in three miles of trenches to repeal land attacks, and the fort was pretty well defended, if not a stereotypical fort.

On February 13, 1862, the Union sent several probing attacks. By February 14, there were about 25,000 Union soldiers, ten ironclads, and two wooden gunboats in positions to attack Fort Donelson. The Ironclads fired upon Fort Donelson but moved in too close and ended up overshooting their targets. This miscalculation allowed the Confederates to heavily damage the ironclads. The shots from the Confederate heavy guns would smash through the decks of some of the ships. There were 54 sailors dead or wounded, including an injury to Foote, and no Confederates lost in this part of the battle.

The Confederates were breaking out on the morning of February 15, and Grant was caught unaware. He ordered his men to sit tight, and the Union Generals met the force of the Confederates and ended up retreating. One would think the Confederates would keep pushing ahead, right? No, a Tennessee politician, Gideon Pillow, persuaded General Floyd to move the Confederates back to the trenches, effectively losing any territory they had gained from the Union. So, of course, the Union regrouped and regained the ground they had lost during the morning.

During the evening of February 15, there were almost 1,000 Union and Confederate soldiers dead, with about 3,000 wounded. The cold continued to creep in while the Confederate leaders discussed what action to take. It was decided to surrender the Fort, but General Floyd and Gideon Pillow would leave and force now-General Simon Bolivar Buckner to handle the actual surrender of Fort Donelson. On February 16, 1862, Buckner surrendered Fort Donelson with approximately 12,000 to 13,000 men to General Grant. 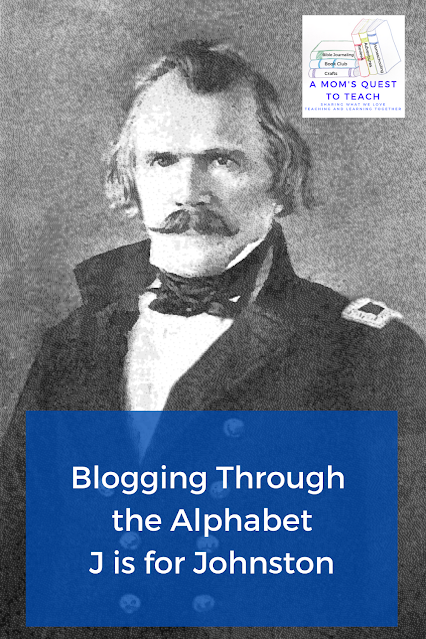 This surrender would propel Grant towards becoming a household name. Lincoln promoted him to Major General after this Union victory. And the consequences for Johnston's forces in the Western Theater would be devastating. About 1/3 of his force were out of action, and the rest were split, with about 200 miles separating them. He then had to evacuate Nashville on February 23, 1862, which meant that the Confederates lost control of their first state capital and a huge industrial center.

Johnston was heavily criticized after the losses of Fort Henry and Fort Donelson. He was charged with drunkenness and incompetence, but Jefferson Davis stood by him while Johnston ignored the critics. Albert Sidney Johnston wouldn't have time to prove himself an effectual general, as he was wounded at the Battle of Shiloh on April 6, 1862 and died on the battlefield.

If you want to join Blogging Through the Alphabet, please visit:
Desiree @ Our Homeschool Notebook
Chareen @ Every Bed of Roses
Posted by Kristen of A Mom's Quest to Teach at 8:28 AM