M is for McClellan (Blogging Through the Alphabet) 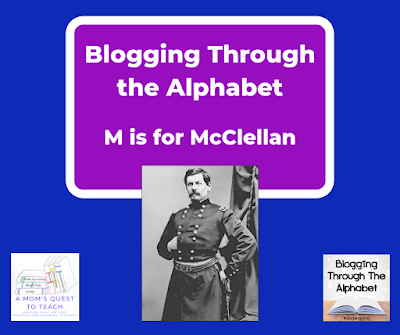 Depending upon perspective, George Brinton McClellan was either a beloved general or a thorn in the side of the plans of the United States during the American Civil War. No matter what, though, McClellan had a huge impact upon the Union during the Civil War.

George B. McClellan was born on December 3, 1846 in Philadelphia, PA. He would go on to graduate from West Point as part of the class of 1846, serve in the Mexican War, study military systems in Europe, serve as chief engineer and later vice president of the Illinois Central Railroad, serve as president of a division of the Ohio and Mississippi Railroad, serve as governor of New Jersey, and commander of the Union Army during the Civil War. 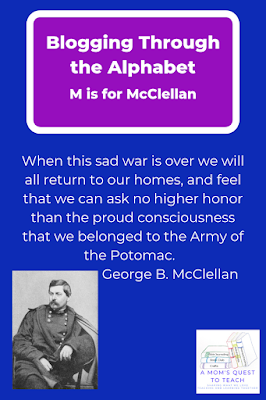 McClellan was well educated and well read. Like some educated people, he only worked as hard as necessary to get by when he attended West Point. He graduated second in the class of 1846 – behind Charles S. Stewart who served in the Corps of Engineers during the Civil War.

The personal library of McClellan contained a great number of books that would help him study the history of war and fighting. There were works on the Napoleonic Wars and books by Caesar, Marlborough, Frederick the Great, Herodotus, Tacitus, Gibbon, and Macaulay, along with a variety of literature, philosophy, and other works.

He made his mark as a railroad executive while working for the Illinois Central Railroad. During his tenure, Abraham Lincoln represented Illinois Central in several legal cases. Politically, the two men had nothing in common. In fact, McClellan would support Stephen Douglas in 1858 for the Illinois Senate race. McClellan would write that in the famous Stephen-Lincoln debates that Lincoln was "disjointed" while Douglas "was compact, logical, and powerful."

McClellan never made his contempt for Lincoln a secret. From his first impression of Lincoln (he thought he was not of strong character and had coarse associates) to his working with him when Lincoln was President, McClellan would find it difficult to work with the beloved 16th President.

During the Civil War


The cautious nature of McClellan would create problems for himself during the Civil War. He did not have much confidence in his officers. McClellan felt it necessary to supervise every aspect which often meant not much could get done to push forward in attacking the enemy.

As a general, he always prepared for the worst. He would anticipate the most unfavorable outcome and expect it to happen. Therefore, he would usually think he would not succeed. He took little to no risk with the Union Army which caused many problems with Lincoln and the other leaders. He usually believed it was greatly outnumbered by the enemy.

While he lacked confidence in his officers and superiors, he did place his confidence in the private soldiers. His confidence in his men might be part of the reason why they respected and loved him so much. His men called him "Little Mac." McClellan was loved by his men in a similar fashion to how Lee was loved and respected by his men. Due to the fact that the Army of the Potomac was largely unorganized when he took over, McClellan set forth proper training and and this helped create a bond within the army.

There are differences of opinion as to whether or not McClellan was really loved by the men. General Smith required his division to cheer for McClellan which gives the idea that the men didn't love him as much as one might think but there are other cases of letters stating how much they liked "Little Mac." In several letters from Captain Edwin H. Little of the 62nd PA regiment, readers come away with the impression that McClellan was well loved. He writes to his wife in November of 1861 that the men gave a "hearty cheer" for McClellan at the grand review and again in April 1862 that every man knows "our little Corporal" as he rides through camp. And finally when Little writes on November 10, 1862, he writes: "I this day Shook the hand and bid Farewell to the best General in the United States" when McClellan was relieved of duty.


McClellan held the belief that he was ordained to his role as General of the Potomac Army in the Civil War. He did not choose to serve as general; God had elected him to save the Union. McClellan wrote to his wife Ellen: "I feel that God has placed a great work in my hands." These ideas might explain his stubbornness in believing he was the only one who knew what was going to happen. But while he believed God chose him, he did not think that meant he was better than anyone else. In fact, he wrote: "I know that God can accomplish the greatest results with the weakest of instruments." 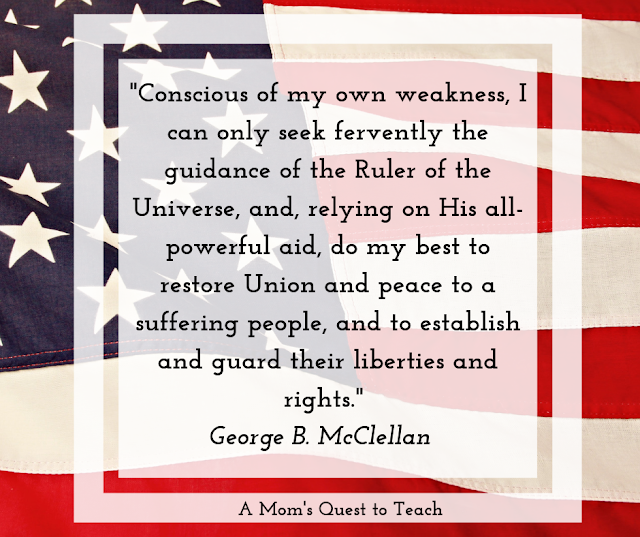 Even though he was modest, McClellan did not take criticism well. He was upset with the attacks on his decisions. He felt that Lincoln cast doubts upon his ability as leader of the Union Army. Eventually all the delays, including not pursuing the Confederate Army after the battle of Antietam in 1862, led to Lincoln replacing McClellan with General Ambrose Burnside in November of 1862. This ended McClellan's military career.


After being relieved of command, McClellan was ordered home to Trenton and await orders that never arrived. In 1864, he was nominated as the Democratic presidential candidate to run against Lincoln. McClellan ran on an anti-war platform – promising to bring peace. Had the war continued to go poorly for the North, that might have won him the presidency. However, there were a series of victories for the North that helped convince voters the war would soon be over.

McClellan and his vice presidential candidate, George Pendleton, ran on a peace platform. Lincoln and Andrew Johnson ran for the National Union Party (Republican party and some War Democrats). With the taking of Atlanta by the Union General Sherman in 1864, the war seemed to be nearing the end. The Union Party set forth the slogan: "Don't change horses in the middle of the stream" to promote the reelecting of Lincoln. Lincoln was elected to a second term in 1864. He won by a landslide, defeating McClellan by more than 500,000 popular votes and by 191 electoral votes.

McClellan would go on to serve as governor of New Jersey from 1878 to 1881. His term was conservative and without any real political problems. He would only serve the one term and afterward work on his memoirs (which would be published after his death). He died suddenly of a heart attack at the age of 58 and is buried in Trenton, New Jersey.


I think McClellan is another one of those historical figures who has been misrepresented through history. If you want to really know more about the man, it is necessary to read primary and secondary sources as well as taking a look at his own book, McClellan's Own Story. So while Lee has been built up over the years and then torn down, McClellan has faced many years of disparaging remarks. This is another reason why I think it is important to be careful when judging historical figures and leaders by standards not held within their own lifetime – times change and so do attitudes, beliefs, and ideas.

Please Join Blogging Through the Alphabet this week!


You are invited to the Inlinkz link party!
Click here to enter