F is for Fair Oaks (Blogging Through the Alphabet) 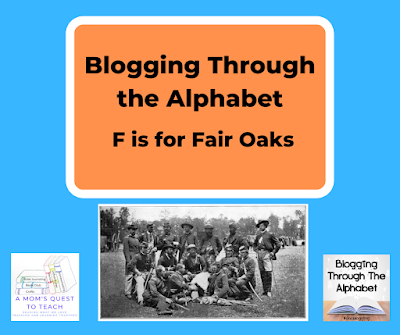 
Sometimes battles themselves are not necessarily as important as their repercussions are. The Battle of Fair Oaks (or the Battle of Seven Pines as it is more commonly known) is one such battle. Fair Oaks set the stage for the Seven Days' Battles during the summer of 1862 as well as led to Robert E. Lee taking command of the Confederate Army. 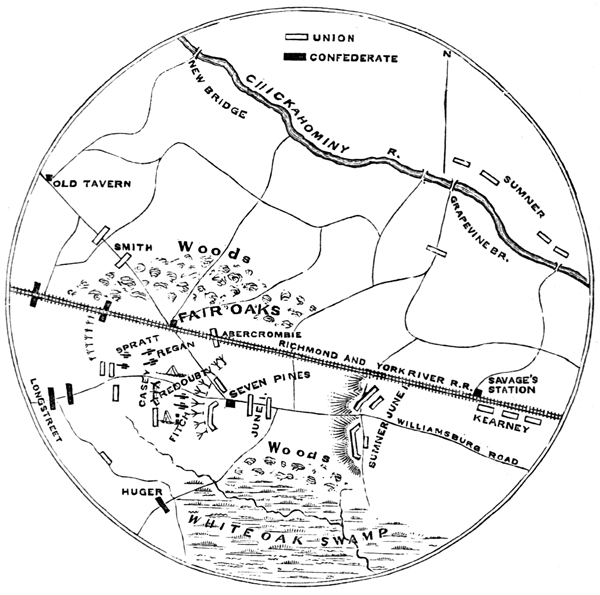 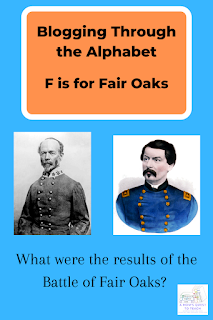 
On May 31, 1862, Johnston made an attempt to overwhelm the Union troops on the southern side of the river. The Confederates south of the Richmond & York River Railroad pushed the Union back twice. They were successful in pushing back the IV Corps of the Union. Both sides would send reinforcements with the Union stabilizing their position.

Part of the reinforcements of the Union was that of the 2nd Corps headed by General Edwin "Bull" Sumner. One of his divisions traversed swaying bridges as the Chickahominy River had swollen by recent rains. They joined the battlefield around dusk near the railroad station of Fair Oaks.

Around dusk on May 31, a bullet struck Johnston in the right shoulder and a shell fragment then hit him in the chest. He fell unconscious from his horse. With a broken right shoulder blade and two broken ribs, he was evacuated to Richmond.


The command of the Confederate army was temporarily traded to Major General G. W. Smith. On the first of June, the Confederates resumed their attack but the Union had their reinforcements. That made it difficult for them to make any progress.

Both sides claimed victory despite neither side really winning a decisive tactical victory. There were about 10,000 casualties. This made it about the bloodiest battle to date.


McClellan, who was always reluctant to commit to battle, walked and rode across the battlefield and saw the devastation. This further endorsed the idea in his mind that he did want to lose the men of his Army of the Potomac. He shared that he was upset by the death and that "victory has no charms for me when purchased at such cost." His reluctance would be seen time and time again as a flaw until eventually President Lincoln replaced him on November 5, 1862.

The second and more important result of the Battle of Fair Oaks was the wounding of Joseph Johnston on May 31, 1862. While injured, Johnston was replaced as commander of the Army of Northern Virginia by Robert E. Lee. This change by Confederate President Jefferson Davis put the man who has been called "the most important figure, political or civilian, in the Confederacy" by Civil War Professor Gary W. Gallagher.

So a battle with which most people are unfamiliar in the history of the American Civil War had a tremendous impact on the rest of the Civil War. One can very easily play the 'what if' game in regards to Lee not taking command of the Army of Northern Virginia. Maybe the Civil War would have ended sooner? Maybe the Battle of Gettysburg would never have taken place? Who knows what the results would have been if the bullet and artillery shell had both missed Johnston on May 31, 1862.

(Johnston did not die from his wounds. He would continue to command in the western theater of the Civil War but never in as prominent a position as when he was in charge of the Army of Northern Virginia. He was removed from command in July 1864 but reinstated by Davis after public outcry in the Confederacy. Eventually he would surrender to General Sherman in April 1865.)


Do You Want To Join Blogging Through the Alphabet?

You are invited to the Inlinkz link party!
Click here to enter
Posted by Kristen of A Mom's Quest to Teach at 1:24 PM