E is for Early (Blogging Through the Alphabet) 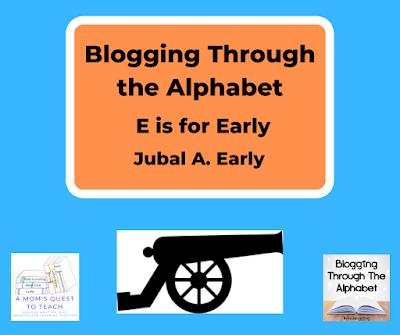 Like so many other officers who served in the Civil War, Jubal Anderson Early attended the United States Military Academy. He graduated 18th of a class of 50 from West Point in 1836. He went on to serve in the Florida area fighting the Seminole American Indians in the Second Seminole War but resigned and became a successful lawyer, serving in the Virginia House of Delegates. Again, like so many other men of the day, he fought in the Mexican War.


Early was opposed to the idea of secession. As representative to the Virginia Convention in 1861, he voted against seceding and condemned the bombardment of Fort Sumter. But again like other men of the time, he joined his home state when they seceded. He accepted a commission as the Colonel of the 24th Virginia Infantry. 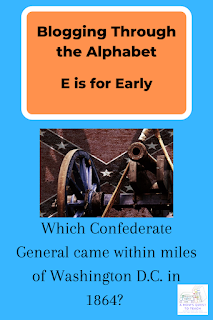 
At the first Battle of Bull Run (or Manassas), Early served with distinction. His unit helped drive the Union from the field. Shortly after this battle, he was promoted to Brigadier General. He also participated in the Peninsula Campaign and the battle of Malvern Hill on July 1, 1862.

Throughout the Civil War


Early was involved in many of the key battles in the Eastern Theater of the Civil War such as the second Battle of Bull Run, Antietam, Fredericksburg, Chancellorsville, Gettysburg, and others.

At the battle of Fredericksburg, Early led a counterattack against General Meade's forces which had broken through Confederate forces. Meade's men had penetrated Jackson's line. Lee was impressed by Early's performance. He was promoted to major general on January 17, 1863.


Early was involved in the Confederate invasion in Pennsylvania in 1863. He captured towns like York and demanded a ransom from the towns.


General Lee put Early in charge of 14,000-15,000 soldiers (known as the Army of the Valley) in 1864. They drove the Union Forces from the Shenandoah Valley. Early and his men then turned north and fought the Battle of Monocacy on July 9, 1864. There were 6,600 Union troops near Monocacy Junction with Early's much larger force to the north in Frederick, MD.


Union Major General Lew Wallace blocked Early's best route to Washington D.C. The Union would hold the Confederates off till their lines began to waver towards the mid-afternoon. By early evening, Wallace had to retreat to save his remaining men. Even though the Confederates won the battle, Early's advance on Washington D. C. had been delayed enough that Union reinforcements reached the Union capital.

On July 11, Early and his men were five miles from the White House. There was skirmishing that took place on July 12 at Fort Stevens. To witness this skirmish, President Lincoln stood with sharpshooters' bullets zooming past his stovepipe hat. Early and his men stood on the doorstep of Washington D.C. but Union reinforcements arrived and Early had to withdraw into Virginia on July 13.

While retreating, Early's men seized and burned goods and towns. They demanded money from the towns they went through including Hagerstown and Frederick. If the money was not paid, they would destroy both private and public property.

While Early did not actually invade the Union capital, his men's escapades at the outskirts of the city led some to believe that the Confederacy was still strong. In fact, the London Times stated "the Confederacy is more formidable than ever." And Lincoln called for 500,000 additional men to serve in the Union army.


Little by little, Early's men would be decimated and destroyed and Early was relieved by General Lee before the surrender at Appomattox. After the Civil War, Early would help push the idea of the Lost Cause which condemned Reconstruction and promoted the cause of states' rights.


Join Us at Blogging Through the Alphabet

You are invited to the Inlinkz link party!
Click here to enter
Posted by Kristen of A Mom's Quest to Teach at 3:46 PM