K is for Kansas-Nebraska Act (Blogging Through the Alphabet) 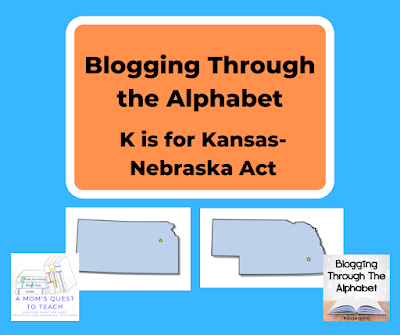 The Kansas-Nebraska Act was signed by President Franklin Pierce on May 30, 1854. According to James McPherson in The Battle Cry of Freedom, it "may have been the most important single event pushing the nation toward civil war" (121). Just how did it come about? And what did the act actually do that was so important to American history?

One could say that the Kansas-Nebraska Act completely finished off the Whig Party in American politics and allowed the creation of an entirely northern Republican party. It opened up territory that had been previously closed to slavery due to previous bills, acts, and compromises. The Kansas-Nebraska Act also demonstrated the idea that popular sovereignty was actually a false idea and would not be true in reality in the Kansas or Nebraska territories. Abraham Lincoln also came to the forefront in politics as he argued against the Act.


In the 1850s, Americans were looking westward in greater numbers. Land speculation, the gold rush, the building of a transcontinental railroad, and more factors pushed Americans westward. People wanted to build roads and a railroad to California but the land between the East and West also needed to be settled. But who would settle the land? People from the North or the South?

Two Democrats from Illinois, William A. Richardson (House of Representatives) and Stephen A. Douglas (Senate) pushed for westward expansion. They introduced bills to organize the Nebraska territory. While it was passed in the House, it was tabled by the Senate. 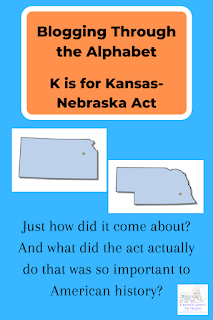 
Atchinson told Douglas that the ban on slavery needed to be repealed. So the bill was rewritten. One of the versions, from January 1854, stated that the people would determine if Nebraska was pro- or anti-slavery (much like that of Utah and New Mexico). This change was not enough for the Southerners.

Douglas altered the bill again to organize two territories: Kansas and Nebraska. There would also be repeal on the ban of slavery North of the 36˚30’. As one would guess, there was a lot of anger when this new bill was introduced. Anger from President Pierce, Free Soilers, Northerners, and Whigs. But this did not matter. The repeal had to be in the bill to appease the Southerners.

In the Senate, the discipline of the Democratic party pushed the bill through to the House. The Northern Democrats of the House were concerned because they faced reelection. People would not be happy in the North if they passed a bill that repealed the ban on slavery north of 36˚30’. The bill was still pushed through with a vote of 115 to 104. And not surprisingly only seven of the Northern Democrat Representatives who voted Aye were reelected. The passing of the bill also left divisions in the Whig Party.


What Did Lincoln Say About the Kansas-Nebraska Act?


While calling himself a Whig, he spoke out in October of 1854 in an anti-Nebraska speech. He argued that the Founding Fathers had opposed slavery. It was only tolerated temporarily and—through many of the actions of the Founding Fathers—they showed that they wanted to prevent the spread of slavery. With the Northwest Ordinance, the prohibition of the slave trade in 1807, and the Missouri Compromise of 1820, the expansion of slavery was slowed and stopped. There was an example of gradual emancipation with the state of Maryland. Lincoln was expressing the new platform of the Republican party: The Union must be saved and it must be worth saving. Slavery must be cut out.


In theory, the people living in the territories of Kansas and Nebraska were to decide the fate of their states. Would they be pro- or anti-slavery? From 1854 till the start of the American Civil War, there was bloodshed spilled to determine the answer to this question. In fact, we have the term Bleeding Kansas due to the violent outbreaks that occurred as pro- and anti-slavery men fought to achieve their aims. The events of this 'war' would help push America towards the Civil War.


Do You Want to Join Blogging Through the Alphabet?

You are invited to the Inlinkz link party!
Click here to enter
Posted by Kristen of A Mom's Quest to Teach at 12:37 PM