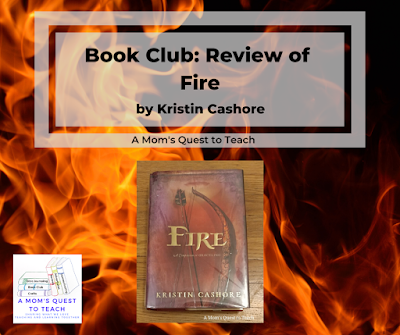 I picked up the second and third books written by Kristin Cashore after reading Graceling, her debut novel. I was intrigued to learn a bit more about the characters first introduced in the first book. Unfortunately, only one character from the Graceling actually had an appearance in Fire, the companion to Graceling. The rest of the characters and the location are new to the second book. The readers are transported to the Dells and meet the citizens ruled over by King Nash. 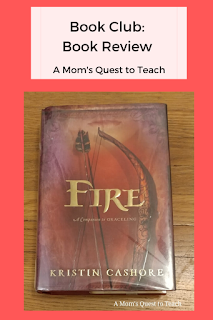 As this is a companion piece to Graceling, we need to learn lots of new names and locales in Fire. The main character is Fire, one of the last human monsters in the Dells. As a human monster, she has the ability to control people's minds and also by her mere appearance she can influence people. Fire is exceptionally beautiful and men fall immediately in love with her on many occasions. The cast of characters also includes the people that Fire cares about and comes to care about over the course of this novel, written for young adults. Due to Fire's special ability, she is asked to aid the king in finding out more about the plans to overthrow his kingdom. This places her in direct contact with the character from Graceling.

What Do I Think?

I was a bit surprised to find that the second book written by Kristin Cashore was not really a sequel to her first novel. The idea of a companion book is not one that crossed my mind when I went to the library to pick it up. I was intrigued when I first read that only one of the characters from Graceling would make an appearance but I was not expecting it to be a young Leck. I admit to having an idea as to how he came to rule Monsea but I didn't really feel the need to know more about his childhood or young adulthood. I did not need to know what happened to Leck's father and I was not pleased to see him become involved with Fire towards the end of the book.

I almost wish the book had some colorful illustrations to help bring to life the non-human monsters that were interested in attacking Fire. Even though I usually like imagining what characters and creatures look like myself, I would have liked to see the colorful raptors and furry monster kittens.

I think my favorite parts included those with Brigan and Fire. I loved seeing their relationship grow. It was truly nice to see how much they complemented each other. As the commander of army, Brigan spent a lot of time on the road with the army so there were lots of goodbyes but also many joyous moments when he came back home.

If you are looking to share Fire with your teen, you should be aware that the characters engage in physical relationships. One of the characters has relations with more than one woman during the course of the novel. Two of these ladies end up carrying his babies. There is also discussion as to how to end a pregnancy using powders (in fact, Fire uses these powders herself). And as this is a book in which the world is at war, there is torture, murder, death, and more.

Would I recommend Fire? I am not sure. I think each individual needs to take a look at it to make their own decision. At one time I might not have enough thought a second time about some of the events and actions of the novel, but now as a parent I tend to examine each book differently. Would I want my children to read Fire? Would I want my teen to pick it up and read it without me knowing the content?