Z is for Zouave (Blogging Through the Alphabet) 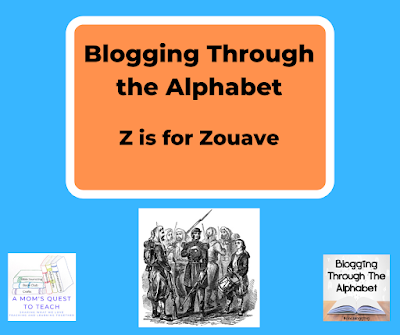 
Z was another letter that was a bit difficult to decide upon for Blogging Through the Alphabet. I had seen examples of the Zouaves uniforms in Civil War museums and it stuck with me. Such an elaborate uniform. Just who were the Zouaves?

The Zouave was originally linked to the French Army and to French North Africa. They were originally recruited from North Africa but were soon made up of mostly European infantry soldiers. The name would also be used for some regiments in the American Civil War – the most famous being those from New York and Pennsylvania.

There were several things that brought the Zouaves together to form a common bond. Their distinctive style of uniform and their action on the battlefield joined them together. I love this quote from the American Battlefield Trust: "They enjoyed a reputation of being recklessly brave on the battlefield, as though warfare was merely a game and their lives simply the table stakes." It seems, like so many regiments, they either came together as tightly-knit families to be very successful on the battlefield or they just did their job as soldiers without much passion.

Popularized in the United States 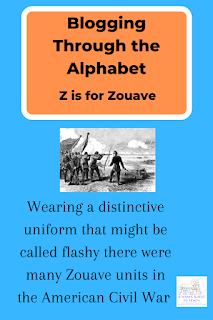 Even though Americans became familiar with the name Zouave prior to the American Civil War (thanks in part to the Crimean War in 1854), Zouave regiments and organizations were not formed until 1859. The one that brought fame to the Zouaves was created by Elmer E. Ellsworth. He renamed a drill company to the United States Zouave Cadets and soon everyone began to take notice.

The uniform of Ellsworth's Zouaves was seen as they began touring the Northern United States doing drill competitions. It was described as having a bright red cap with gold braid, a light blue shirt, a dark blue jacket with orange and red trimmings, brass buttons, a red sash and loose red trousers. Soon, Zouave units were being formed and created across America. There would be so many Zouave units created that there would be one present at every battle during the American Civil War from the First Battle of Bull Run to Appomattox. 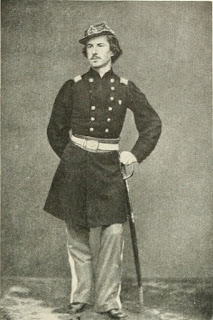 The first Union officer to be killed, Elmer E. Ellsworth had led the Zouave Cadets of Chicago (as I shared earlier). He had worked with Abraham Lincoln in Springfield, Illinois and was a friend of the President. With the start of the Civil War, he organized the Fire Zouaves (11th New York Volunteer Regiment) from New York City's volunteer firefighting companies.

The Fire Zouaves were one of the first units to occupy Confederate land when they captured Alexandria, Virginia. The capture of this city would ultimately lead to Ellsworth's death as he retrieved a large Confederate flag hanging at an inn. As Ellsworth and his accompanying soldiers came down the stairs with the flag, the proprietor of the inn, James W. Jackson, fired upon Ellsworth killing him instantly. Jackson then fired upon Private Francis E. Brownell but missed. Brownell fired upon Jackson, hit him, and then bayoneted him.

Lincoln had Ellsworth's body brought to the White House where it lay in state in the East Room. People rallied around the death of Ellsworth as the first Union officer to die for the cause and enlisted. "Remember Ellsworth" even became a rallying cry for the Union soldiers.


I find very interesting the many individual stories that came out of the American Civil War. Even though Ellsworth was a friend to President Lincoln, would he be as well remembered if he hadn't created one of the first Zouave units? Would he be as well remembered if he wasn't the first Union officer killed? And think about the uniforms remembered from the American Civil War. Which ones stand out the most? I have to admit that after a while the traditional blue and grays that are known to represent the Union and Confederate seem to fade when we see the fancier uniforms of units like the Zouaves.

I have really enjoyed writing this series of Blogging Through the Alphabet and focusing only upon the American Civil War. For some letters, there were so many different options that I could write about on A Mom's Quest to Teach. Battles, famous (and not-so famous) people, weapons, tactics, and locations – the topics were limitless and also difficult at times. With thousands of books written about the American Civil War, it is very easy to become overwhelmed with information. I hope that through my posts I have introduced you to some new information and maybe inspired you to study more about the American Civil War.


Image of Ellsworth from: The Photographic History of The Civil War in Ten Volumes: Volume One, The Opening Battles. The Review of Reviews Co., New York. 1911. p. 350

Do You Want to Join?


You are invited to the Inlinkz link party!
Click here to enter
Posted by Kristen of A Mom's Quest to Teach at 5:14 PM