Memories of My Grandmom 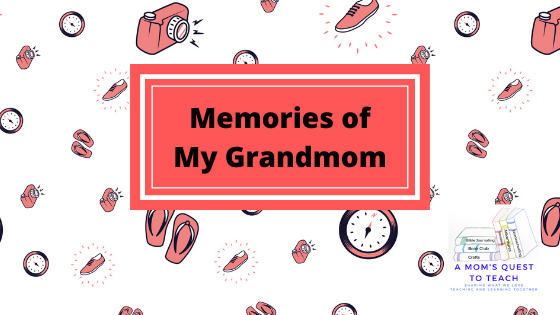 I had the joy of spending many summer days at my maternal grandparents' home. I was an only grandchild, so I often had their undivided attention. My Grandmom would play board games, card games, and help my imagination grow by playing school and store with me. My Grandpop would often let me go on walks with him to the corner store. It was from him that I learned to walk fast as he was tall and a fast walker.


One of the fun aspects of spending time at my grandparents' house was that I could play with another entire set of toys. They had kept my mom's and uncle's toys, and I was allowed to play with some of them. There was also a huge box of rocks that were collected by my uncle for his geology class at college that created roadways and parking lots for the toy cars. With the cheaper dolls that were purchased from the corner store, I was allowed to experiment with doll hair cuts. I created my own paper dolls using old Sears and J.C. Penny catalogs. 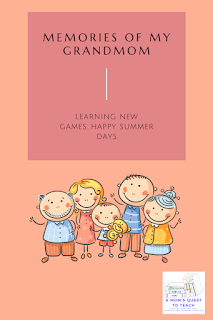 There was also a great collection of old board games (many of which have modern-day versions) like Go to the Head of the Class, Chutes and Ladders, Monopoly, and Candyland. And there were a few other games that had missing pieces or rules that allowed my Grandmom and I to create our own rules and new games. Sometimes we even drew these new game boards on the back of the original game boards and used stickers to help create the game.


My Grandmom helped inspire my imagination in a number of ways. For this, I am very grateful. She spent many hours helping me set up pretend stores, labeling everyday objects with prices, and then allowing me to use the adding machine with tape as my cash register.  She also spent many days pretending to be my student as I was the teacher. I remember using a blackboard to write assignments and reading books to her. She also let me flip a card table on its side to create a cave using blankets, couch cushions, and pillows to camp out in during thunderstorms – both real and imaginary.

From the Beginning to the End


At the start of each day, my Grandmom would open the curtains saying, "Let there be light." I never realized how much I could miss that simple phrase that I used to find so silly when I was a kid. After my Grandpop died, she moved a few states away to live with her son, my uncle. As she got older, she changed and often the curtains were not opened in their house at all. In the end, my Grandmom changed from the woman who spoiled me to someone afraid of the outside world and strangers – even of me and my mom at the very end.

As an adult, it is much easier to look back and be grateful for all the happy memories we made together. I am willing to embrace those sad memories more and more as I see changes in my own mom. Time is short, and I pray that everyone has more happy memories with their grandparents than sad ones that lead to gratitude and thankfulness.
Posted by Kristen of A Mom's Quest to Teach at 2:21 PM