B is for Boxer Rebellion (Blogging Through the Alphabet) 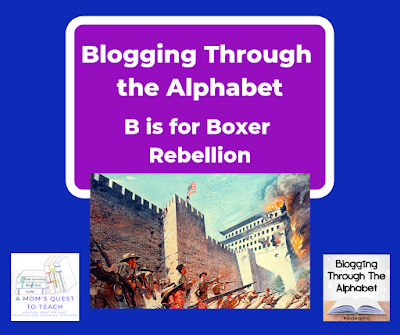 During the colonial era, nations were expanding around the globe. Living here on the North American continent, we tend to think of the the colonial era ending with maybe the American Revolution or the freedom of many South American nations in the 1800s, but colonialism actually continued in the Eastern part of the world well into the 1900s. One example of a clash between native peoples and those seen as invaders was that of the Boxer Rebellion in China. The climax of this violent opposition to Western powers and ideas left many Chinese and non-Chinese dead.


What were the reasons behind the rebellion?


Individuals in China were seeing outside influences as intruding upon Chinese culture. They were against the spread of Western and Japanese ways of life in China. In the years prior to the rebellion, a series of wars led to the growing power of Western nations and Japan in China. Money and territory were ceded to foreign powers, which angered many Chinese groups. Natural disasters in the Shandong province (where the rebellion would start) were blamed on foreign influence.

In addition to the widespread foreign control, German missionaries, who were under the protection of the Qing government, were viewed as trying to change the way of life. Many also looked upon the Chinese Christians as part of the problem because some just converted to receive benefits such as charity, food, education, etc.

In addition, Chinese Christian converts did not follow the traditional Chinese ceremonies or adhere to familial practices. They were also often from the lower classes of Chinese society. In local disputes, missionaries pressured local officials to side with the converts over the non-converts which angered those who thought foreigners had too much influence in China.

The Boxer Rebellion was started by the Righteous and Harmonious Fists (Yihequan) which was one of several secret societies. Leaders were involved in the martial arts movement and Westerners described the rituals as shadowboxing hence the nickname – Boxers. Some practiced certain physical exercises that they believed would  make themselves invulnerable to Westerners' bullets.

It wasn't just the Boxers who held anti-Western feelings – even members of the the ruling class held the same opinion. 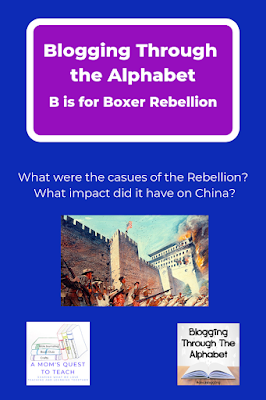 In 1898, the movement became more aggressive and less localized. During the summer of 1900 they marched on the imperial capital. The Boxers also began destroying anything with a foreign influence. Schools, houses, and churches were burnt and Chinese Christians and pro-Western Chinese were killed.

In the beginning of this movement, missionaries and other foreigners were left alone but this did not last. In June 1900, there was a siege on the diplomatic area of Beijing. On June 13, the Empress Dowager Tzu'u Hzi ordered imperial forces to block the advance of the foreign troops.

The rebellion lasted for 55 days and 8 international countries' military forces were involved in the stopping of it. Troops were sent primarily from Russia and Japan, with smaller numbers from Great Britain, the United States, France, Germany, Austria-Hungary, and Italy.

Western powers occupied Beijing and seized coastal forts. While the homes of the foreign diplomats were under attack, foreigners and Chinese Christians still resisted. In the countryside, the Boxers attacked missionaries and other foreign civilians who did not have the protection afforded to them in the cities.

An End to the Rebellion


Eventually the Western powers were able to suppress the Boxer Rebellion leading to the Boxer Protocol being signed on September 7, 1901. China was forced to pay an indemnity to Western powers. The dowager and emperor were allowed to return to rule but the execution of several officials and destruction of forts happened.

The reparations totaled more than $300 million dollars (today that would be about $8.5 billion) and several nations, including the United States, would put that money towards education. For example, the United States used the money on the condition that there would be a university built in Beijing.

The numbers of dead vary depending upon sources – from only several hundred Chinese and non-Chinese dead to over 100,000 dead. Whatever the actual number of Chinese citizens and foreigners, the event would continue to influence relations between China and foreign nations into the future. The Boxer Rebellion would also be a leading cause of the end of the Qing Dynasty in China. 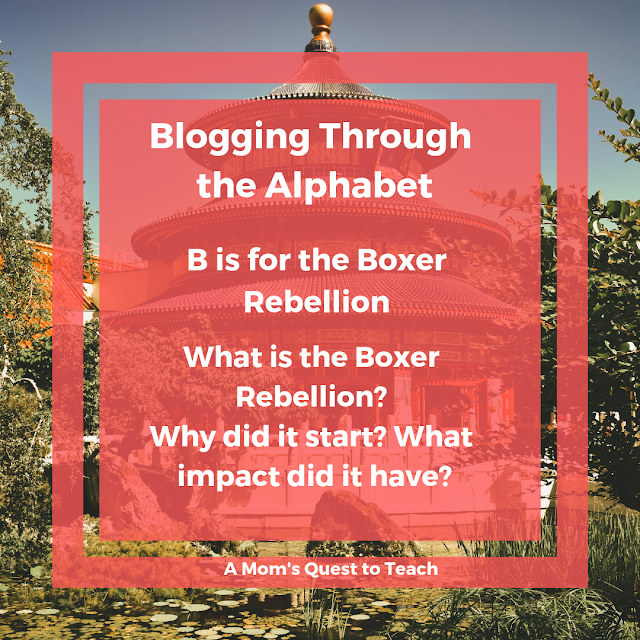 Looking to learn more about China?


From the early history of China, read about the Zhou Dynasty and the Qin Dynasty (which gave the nation of China its name).

Want to link up with Blogging Through the Alphabet?