C is for Confucius (Blogging Through the Alphabet) 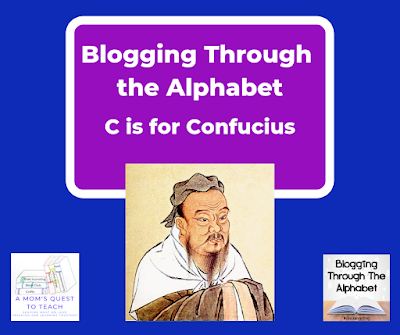 Like many individuals in history who have become influential, not much is known about Confucius. The teacher, writer, and statesman from the prosperous state of Lu (present day Shangdong province) lived sometime between c. 550 BC and 480 BC in Ancient China. The information that we do know about Confucius (also known as Kong Qui and K'ung Fu-tzu) was written down by his students and later generations. The main source of his teachings and sayings is The Analects. While he was a member of the professional administrative class, he only held minor positions and eventually settled into the position of a teacher in his home state of Lu.

There are five archetypal relationships which include:
People should fulfill their role in their various relationships by doing the right thing. Individuals should treat others with respect, live virtuous lives based on traditional customs, and follow rituals (which varied from very simple to elaborate). 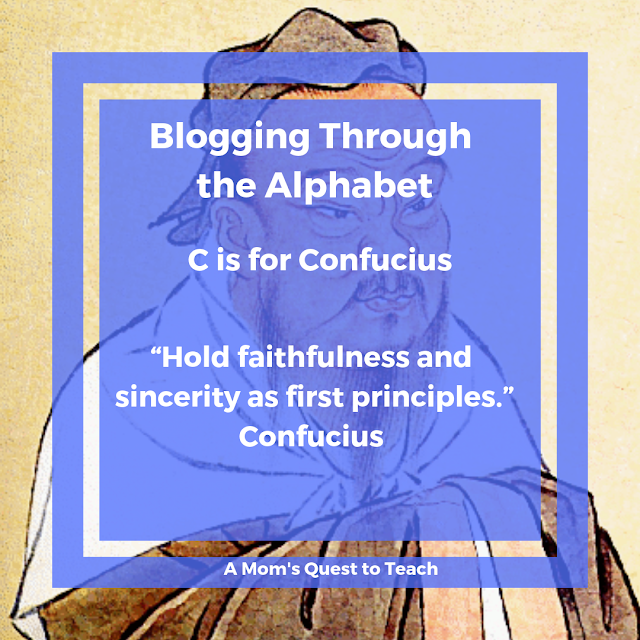 Influence on the State

Confucius taught about the proper role of leaders. Self-discipline was an important characteristic of leaders, which would help them fulfill the relationship between ruler and subject. Rulers should remain humble and be a positive role model for their subjects. If everyone in society fulfilled their roles, then society would function smoothly.

The ideas of Confucius would eventually be known as Confucianism and they still hold an important part in many cultures today. 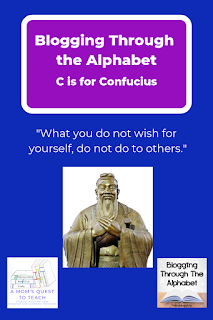 More Blogging Through the Alphabet Posts

Looking for more posts about China and its history? Why not read about the Boxer Rebellion or the Zhou Dynasty?

Looking for more Blogging Through the Alphabet Posts?

Inlinkz Link Party
Posted by Kristen of A Mom's Quest to Teach at 4:14 PM