H is for Hancock (Blogging Through the Alphabet) 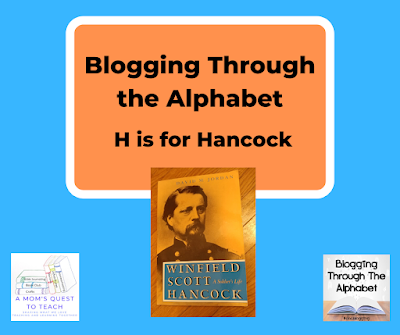 Winfield Scott Hancock presents one of the typical soldiers of the time period. He graduated from West Point in 1844, served in the Mexican War, and then served in the American Civil War. And like other men of the time period, he was first highly regarded, then received criticism after the war, only to be seen in high regard again in the present day.

Hancock was described as one of the handsomest men in the army. He was always neatly dressed. Even in the middle of a long march, he had clean, pressed white shirts. In addition to his appearance, Hancock was also noted for several other key things in relation to fighting. Even though he was always in the thick of action during battle, he did not actually court danger on the battlefield but did what he was ordered. He had an air of command and cared for details. He was meticulous, thorough, and very businesslike in military manners but during social hours, Hancock was gentle and kind. He learned the names of every officer in his command. McClellan referred to Hancock as "superb." 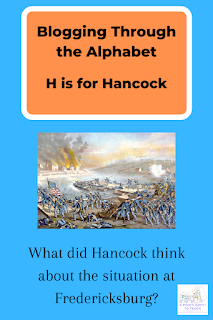 Hancock was involved in several important battles and campaigns including:


After the Civil War, he oversaw the execution of the conspirators who planned the assassination of President Abraham Lincoln.


On November 17, 1862, Hancock's division arrived at Falmouth, Virginia, across the river from Fredericksburg. At the time there were only a few Confederate cavalry men in the town. With the delay of the arrival of pontoon boats till November 25, Confederate General Longstreet was able to become entrenched in the city of Fredericksburg and General Jackson was on his way. The element of surprise was gone.

Hancock was worried about the plan outlined by General Ambrose Burnside. He voiced this concern of attempting to take the fortified heights (Marye's Heights). He was not the only man who thought this was a disastrous move to make but the Union would send more than one attack up that hill.

Hancock's division was sent to support the engineers who were working on the pontoon bridges to cross the Rappahannock River, they then crossed the river on December 12 and spent the night in the ruined town of Fredericksburg. His division then followed Sumner's division in attacking Marye's Heights. He tried to support his men wherever he could and suffered a minor wound when he was grazed by a musket ball.

The Battle of Fredericksburg was a loss for the Union. There were 12,000 Union casualties with Hancock's division having suffered 1,200. He wrote to his wife, "It was desperate undertaking, and the army fought hard." After the battle, Hancock took a leave of absence so he could spend time with his wife and his children.

You are invited to the Inlinkz link party!
Click here to enter
Posted by Kristen of A Mom's Quest to Teach at 12:02 PM