I is for Iron Brigade (Blogging Through the Alphabet) 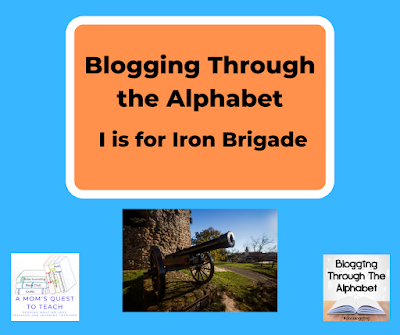 The Iron Brigade was one of the many nicknames for an infantry brigade in the Army of the Potomac during the American Civil War. They were formed on October 1, 1861, with the following regiments falling under the command of Brigadier General Rufus King: 7th Wisconsin, 2nd Wisconsin, 6th Wisconsin, and the 19th Indiana. They were also called the Black Hats due to their 1858 black-felt Hardee hats which caused the Westerners to look even taller and made them extremely distinguishable among the soldiers in the army and they were also called the King's Wisconsin Brigade. In addition to the broad-brimmed, high-crowned Hardee hats, they wore thigh-length frock coats in the field. The Iron Brigade, an all-western brigade, had the reputation of one of the best units in the army.

In addition to being the only all-western brigade to serve in the Eastern army on the Eastern front, they also suffered the highest percentage of casualties of any brigade in the American Civil War by the end of the war. For example, they suffered a 60% casualty rate at the Battle of Gettysburg. One thousand one hundred fifty-three were killed or wounded out of one thousand eight hundred eighty-five who participated in the battle. The all-Virginia Stonewall Brigade had the same distinction within the Confederate army of suffering the highest percentages of casualties.

Some of the battles in which the Iron Brigade fought include Bull Run, Antietam, Fredericksburg, and Gettysburg. They earned their distinctive nickname at the Battle at South Mountain in 1862.


At the Battle of Antietam, the Iron Brigade saw great frenzy on the battlefield. They were at the forefront of the opening attack. The 6th Wisconsin, part of the Iron Brigade, had 40 men killed and 112 wounded out of the 300 men engaged in the battle. In general, it was stated that they had only 400 to 500 left out of the 2500 men who were marching with the Brigade two months prior to Antietam. The men proudly stated that there were no sick men nor any stragglers. There were no cowards. The men who were not present had either died or were wounded on the battlefield. 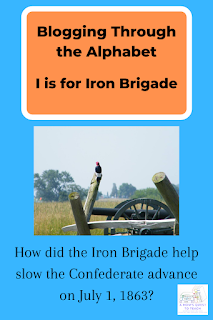 On July 1, 1863, the Confederates were in the woods, on the other side of McPherson's ridge. The Iron Brigade was along Emmitsburg Road and they marched towards the Lutheran Seminary. The five regiments were commanded by Solomon Meredith and moved forward at double-quick to reach the Seminary.

The Iron Brigade moved through Herbst's Woods on the southern side of Cashtown Pike. They would have to move quickly into battle, actually loading and fixing their bayonets on the way.

One of the specific ways in which the Iron Brigade helped slow down the Confederate advance on the first day was with the charging of the 6th Wisconsin order by Lieutenant Colonel Rufus Dawes. The Confederates on one side of the railroad cut, the 2nd Mississippi, were able to quickly fire off one volley that seemed to knock over half the men of the three regiments that rushed the fifty-yard. Even with this attack meeting the Yankee charge, the men of the 95th New York, 14th Brooklyn, and 6th Wisconsin regiments surged forward and were upon the Mississippians. Dawes ordered the surrender of the Confederate regiment and this brought him 200 prisoners, a rebel battle flag, and officers' swords. With the position of this land, the Confederate advance on the morning of the first day of the Battle of Gettysburg was slowed.

This history of individual regiments, brigades, and companies can be quite interesting. While researching the Iron Brigade, I was able to learn more about the events of the early morning of July 1, 1863, as well as about the uniforms of the different Union soldiers. I highly recommend researching not only battles and famous leaders during the American Civil War but also regiments like the Iron Brigade.

Would You Like to Join Blogging Through the Alphabet?