G is for Gaines' Mill (Blogging Through the Alphabet) 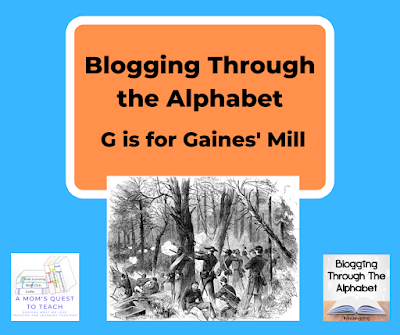 In the summer of 1862, there were a series of battles that became known as the Seven Days Battles. The second and probably biggest was that of Gaines' Mill (or Gaines's Mill) fought on June 27, 1862. Even though this was a Union defeat, it does demonstrate some of the problems of the Confederate Army. There was a lack of coordination that would mean they did not attack until the afternoon. There would be no decisive blows delivered by the Confederates at Gaines' Mill.

The battle of Gaines' Mill took place in Hanover County, Virginia, along the Chickahominy River to the northwest of the Confederate capital, Richmond. In a battle that would only last 6 hours, almost 13,000 men from both armies would be captured, wounded, or killed. 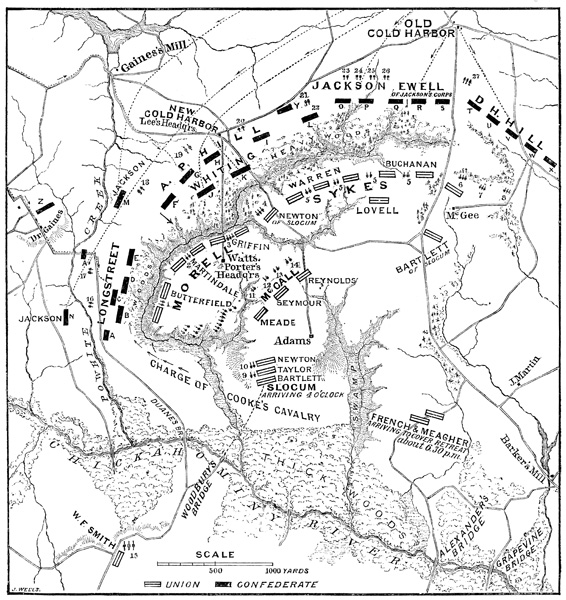 Before the battle, there was a distinct lack of coordination on the part of the Confederates. Prior to the start of the Seven Days Battles, Major General Thomas Stonewall Jackson's men had marched hard. They had spent six weeks in the Shenandoah Valley campaign (May-June 1862) and made the difficult journey to join the rest of the Confederate army. He was slow to get into position which delayed things.

Major General A. P. Hill was supposed to attack the Union General Fitz-John Porter's center. When Hill was attacking the center, Major General James Longstreet was to feint against the left of the Union line while Jackson attacked the Union right. It was not until sundown that all of Lee's commanders were in position and working together. 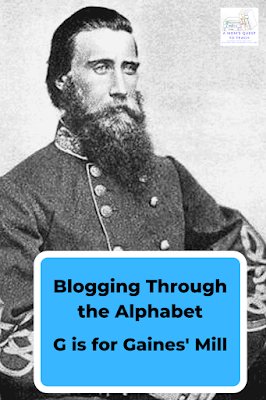 Once the Confederates launched their attack, General John Bell Hood pierced the center of Porter's line. There were over 50,000 Confederates participating in the afternoon attacks. They pushed through thick underbrush to launch wave after wave of attack. The only thing that stopped a rout by the Confederates was the arrival of additional Union troops. These troops enabled most of Porter's men and guns to cross the Chickahominy River.

During the retreat, the Union lost 2,800 men to capture and 4,000 Union men were killed or wounded. The Confederates lost 9,000 men in the victory against the Union at Gaines' Mill. This may have only been a tactical defeat for the Union but they spent time retreating after this battle.

After the battle of Gaines' Mill, Major General George B. McClellan retreated to Harrison's Landing along the James River in Virginia. He messaged the Secretary of War, Edwin Stanton: "I have lost this battle because my force was too small." Similar to many other battles, McClellan believed he did not have enough men to win the battle. He continued, "The Government has not sustained this army....If I save this army now, I tell you plainly that I owe no thanks to you or to any person in Washington. You have done your best to sacrifice this army." (quotation from the Official Records) Fortunately (for McClellan), the last two lines were excluded when the message was delivered from the telegraph office to Stanton or McClellan would have been removed much sooner from command.


Just a short while prior in the battle of Fair Oaks, General Lee was promoted to lead the Army of Northern Virginia and history changed. The battle of Gaines' Mill would be Lee's first successful battle as the new leader of the Confederate army.  In conjunction with the other events of the Seven Days Battles, Gaines' Mill would be part of the first turning point of the war. The Union army had been almost at the doorstep of the Confederate capitol of Richmond and now they were being pushed back. And with the loss at the battle of Gaines' Mill, McClellan started his retreat. Maybe reality was setting in that this would be a longer war than even re-imagined after it did not end with one battle.

Do You Want to Join Us?