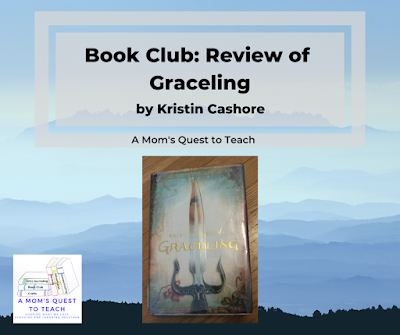 Sometimes I go to the library and wander along the Young Adult aisles to find a new series to read. Partly because they are easier books to read quickly and partly because I like to know what is readily available for teens to read. I picked up Graceling, a debut novel from Kristen Cashore, that was published in 2008.

"In a world where some people are born with extreme and often-feared skills called Graces, Katsa struggles for redemption from her own horrifying Grace, the Grace of killing, and teams up with another young fighter to save their land from a corrupt king."


The majority of the novel takes place in the Middluns, Monsea, and Lienid Kingdoms as we are introduced to numerous characters and learn all about Graces. We meet Katsa as she is taking out guards to help Giddon and Oll rescue the grandfather of the King of Lienid. This elderly, ill man is at the center of a mystery that Katsa and her new friend and comrade, Po (the youngest price of Lienid), must unravel. 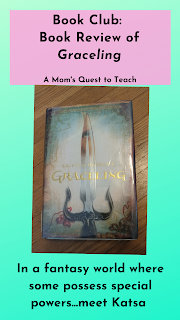 I found the idea of individuals born with special Graces that could aid them (or not) in their lives to be interesting. Some are born with more mundane Graces like being a good swimmer while others had Graces that would or could help their kingdoms like fighting, archery, and swordsmanship. Some of the kingdoms seem to make anyone born with a Grace become an automatic servant of the king. Those Graced are unable to hide themselves as their eyes would change once their Grace finalized. Each eye would be a different color. For example, Po had one silver eye and one golden eye.


While I found the novel to be fast paced through most of the story, I do not agree with all the choices of the author. This book is shelved in our library's Young Adult section but yet contains several graphic sections describing the sexual relationships between the characters. In fact, the characters make the decision to not marry but continue to carry on a physical relationship. Personally, I would rather my teen not be presented with a topic this weighty in a fantasy novel but that is the world of today, unfortunately.

In addition to the physical relationship between the characters, there is a lot of violence due to the nature of the story. Katsa works for a very harsh and cruel king who requires her to sometimes punish and torture people who disobey him. And even though Katsa has formed a council to combat the evils of the kingdoms, there was still much intrigue and destruction.

Would I recommend Graceling? With reservations, I would say that some might enjoy the novel. There are moments of death, pain, and torture that may upset many. I will continue to read the series to see where else Kristin Cashore takes the reader but I will not be sharing it with our teen.


Joining up with The AtoZ Reading Challenge for 2020 with this book review!
Posted by Kristen of A Mom's Quest to Teach at 7:28 AM