P is for Pickett (Blogging Through the Alphabet) 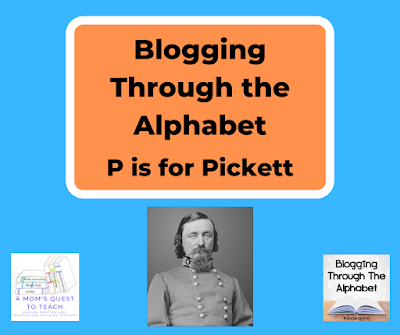 General George E. Pickett of the Confederate Army is probably most known for his fateful Pickett's Charge at the Battle of Gettysburg during the American Civil War. He is one of the many men who graduated from the class of 1846 at West Point. (He would graduate last in his class.) Pickett's military career was very similar to that of most of the men of the era, as he went to serve in the Mexican-American War and then eventually in the American Civil War.  What made the personality of Pickett so powerful that his widow would dedicate the remaining 56 years of her life to his memory?


Pickett missed the early battles of the Mexican-American War but arrived in time for the Battle of Monterrey (Sept 21-23 1846). As part of William Jenkins Worth's Division, he joined Winfield Scott's campaign against Mexico City. At the siege of Puebla in 1847, Pickett was promoted to second lieutenant but was reassigned to the Seventh Infantry. Pickett did not want to leave the Eighth Infantry so he found a way to work around this reassignment. A member of the Seventh Infantry was being reassigned to the Eighth so they worked out a deal with their superiors that they would each stay with their original regiment. It has been suggested that this was one of the first instances that proved to Pickett that rules and regulations could be bent to suit individual situations.

At the Battle of Chapultepec, Pickett picked up the colors (the flag) after it had been dropped by James Longstreet when he was injured at the start. Pickett then carried the flag into the castle as hand-to-hand combat continued and the Americans overwhelmed the Mexicans. One by one, regimental flags were being flown from the top of the castle as the American army won the battle. This would help cement Pickett in the memories of many.


The first action Pickett saw during the American Civil War was during the Peninsula Campaign where he led his brigade in several battles including the Battle of Gaines' Mill where he was injured in the shoulder. The next major battle he was present for was the Battle of Fredericksburg, but he and his men actually saw little combat. 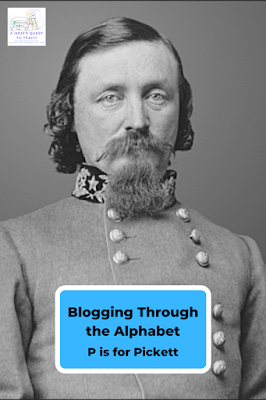 
His fame would come from the Battle of Gettysburg in July of 1863. I love this description by James M. McPherson: "Pickett's charge represented the Confederate war effort in microcosm: matchless valor, apparent initial success, and ultimate disaster" (Battle Cry of Freedom, 662). The charge by the Confederate Army named for Pickett would lead to a great number of Confederate dead and wounded including about two-thirds of Pickett's own division. All thirteen of the colonels and the three brigadiers were killed or wounded from his division.

Pickett was confident that even with the strength of the Union line, that his men were ready. They had the support of the whole army led by Robert E. Lee. Before the charge, the goal was to soften the Union army with cannon fire. The cannons wounded and killed men and horses. Trees, rocks, fences, and the ground were torn apart. 200 cannons wreaked havoc leaving fire and smoke in their wake.

Time elapsed and eventually, Edward Porter Alexander messaged Pickett that he must go now or Alexander would not be able to support the charge. Pickett approached Longstreet asking "General, shall I advance?" twice. Longstreet bowed his head to which Pickett said, "Sir, I shall lead my division forward." Did Longstreet foresee the slaughter that was about to happen? 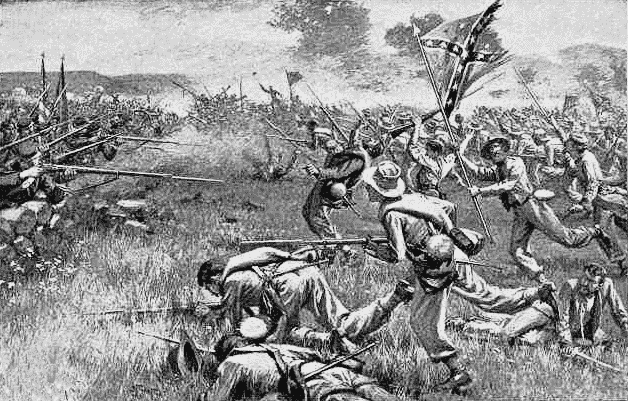 Pickett ordered his men to their posts. The divisions of Pickett, Pettigrew, and Wilcox emerged out of the woods and were on the one ridge while the Union troops were across the valley. The men were met with heavy Union fire. Leader after leader was shot and knocked down. As the charge continued, Pickett had moved into a position where he could see the entire field. What he saw shocked him. His men met defeat. There was no support. Two-thirds of Pettigrew's division was already gone. Wilcox's men moved forward at Pickett's order and were met with fire from the Sixteenth Vermont. The charge soon ended as the Union reinforcements arrived and moved forward.

"Great God, where, oh where is my division!" General Pickett


The entire support of the Confederate Army was not put into Pickett's charge. Only eleven of the infantry brigades were used while many of the remaining twenty-seven only watched the fight. So much of the history of the American Civil War has 'what if's'. What if Lee had ordered other divisions and brigades to participate in the charge? The result of July 3, 1863 may have been very different and perhaps Pickett would have had a division left. 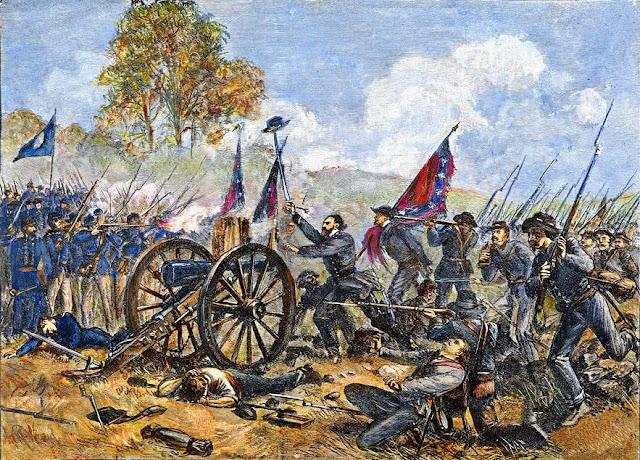 
According to the American Battlefield Trust's biography of Pickett, the defeat of Pickett and his men at the Battle of Five Forks would lead to the eventual collapse and surrender of the Confederate Army. Lee even blamed Pickett for the army's defeat at Five Forks (while Pickett said Lee had his division massacred at Gettysburg). This battle took place at the end of the Siege of Petersburg where the Union goal was to cut supply lines to the Confederate capital of Richmond and eventually take the capital.

Five Forks needed to be defended because if it was taken by the Union they would be able to cut Confederate supply lines and retreat routes from Richmond. The Confederates began taking a defensive position at Five Forks but everything and everyone ended up being poorly placed.

In order to try and prevent the fall of Richmond, Lee sent Pickett and his two divisions to help the Confederate cavalry counter a move by the Union Army. The Union was temporarily stalled but at the road junction of Five Forks, they attacked Pickett's isolated forces. From the Union Army, Philip Henry Sheridan's men and Gouverneur K. Warren's 5th Corps won a Union victory against Pickett. His divisions collapsed and half of them surrendered to the Union soldiers.


Lasalle Corbell Pickett had known her husband since she was only ten or twelve years old and according to her she had dreamed of being Mrs. Pickett her entire life. Pickett married her on September 15, 1863 in St. Paul's Cathedral in Petersburg making Lasalle his third wife. They only lived together as man and wife for about 12 years but she wore black to honor the death of her husband on July 30, 1875 until her own death (typical of the Victorian Era). She would travel the United States to present a romanticized biography of her husband.

Part of the stories that Lasalle told of her husband was that he was well-loved by the Indians that he stayed with after fighting in the Indian Wars and even 'married' an Indian woman. She also said that Pickett had Abraham Lincoln to thank for his attending West Point as Lincoln had urged Pickett's appointment. She might have even faked an entire wartime correspondence with her husband and Civil War historian Gary Gallagher has argued she plagiarized portions of her book, Pickett and His Men (1899).


Like several other generals of the Confederate Army, Pickett was transformed into a hero to serve the purpose of the Lost Cause. But there are many facets to the life of Pickett. His wife, Lasalle, depicted him as a cad. In reality, he did rely on his charm (especially at West Point) but he wasn't quite the ladies' man. Some of the aforementioned correspondence that may have been invented by Lasalle was later used as source material for The Killer Angels (1974) which tells the story of Gettysburg and for Ken Burns' documentary, The Civil War.

In fact, George E. Pickett was an ordinary man who could never live up to the larger-than-life figure that his widow created. Even much of his own bravado and arrogance was just to mask his own insecurities. He wanted to be included in the inner circle of men like Lee, Davis, etc. but he was really on the outside. So this career soldier wore flamboyant clothing (usually ruffles), styled his hair long with ringlets falling over his shoulders, and wore strong scents. He was also known for his strong singing voice.

The surviving members of the Pickett family feel that General George E. Pickett was not served well by General Lee. That Pickett's charge was a "suicide mission" according to a direct descendant of Pickett's brother. So even after historians have tried to overturn the myths and present the facts, there are still stories of as a knight of the Lost Cause.

Would You Like to Join Blogging Through the Alphabet?


You are invited to the Inlinkz link party!
Click here to enter
Posted by Kristen of A Mom's Quest to Teach at 11:34 AM