Q is for Quantrill (Blogging Through the Alphabet) 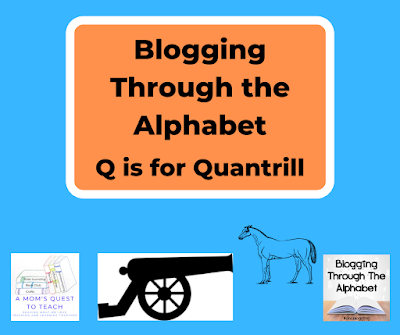 The letter Q is one that is never easy when trying to complete a Blogging Through the Alphabet series. For this current series focusing upon the American Civil War, I looked in the indexes of several books to create a list of possible topics and for Q I came upon William Quantrill. Who was he? I did not recall ever studying about him and if I read about him, it must have been in passing. So I set about to learn more about this Confederate guerrilla leader as he is labeled by the National Park Service. (And there is a lot more to learn about him than I originally thought there would be.)


William Quantrill was born in Ohio on July 31, 1837. He became a farmer, teacher, and gambler all before he was accused of stealing cattle and killing several people. To escape arrest, he fled to Missouri which was where he was prior to the start of the American Civil War.


Beginning of the American Civil War


At the start of the American Civil War, Quantrill formed a band of guerrilla troops that began raiding Union sympathizers in both Kansas and Missouri. In 1862, the Confederate Army mustered his troop into service with Quantrill possessing the rank of Captain. It has even been stated that he was never actually given a commission in the Confederate Army. So his men may or may not have been part of the regular army, but they still operated somewhat independently.

Quantrill's militia took place in the Battle of Wilson's Creek which was the first major battle fought west of the Mississippi River on August 10, 1861. With the Confederates outnumbering the Union, the Union retreated thus giving the Confederates control over southwestern Missouri. Raids would continue throughout the Civil War by both pro-Union and pro-Confederate guerrilla troops.


Prior to the American Civil War, there was much violence in this area of the United States as new states were in the process of being admitted like Kansas and Nebraska. Even during the Civil War, the area of Kansas, Nebraska, and Missouri were a hotbed of agitation due to the pro- and anti-slavery feelings from prior to the war. There was great animosity between the individuals living in the area due to the actions of jayhawkers, guerilla troops, and border ruffians. 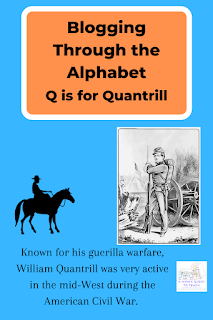 Quantrill's band of about 450 men attacked most of the town of Lawrence's buildings on August 21, 1863. They killed anywhere from 150 to 190 civilians (some in cold blood). Quantrill and his men then went on to loot and burn the town. The band also had some famous members on this sad day including Frank James (Jesse James' brother).


In the spring of 1865, Quantrill continued to raid towns in Kentucky. Quantrill was mortally wounded on May 6, 1865, during an ambush with Union soldiers in Kentucky. He succumbed to his wounds on June 6, 1865. Similar to other individuals during the American Civil War, like Pickett, much of what we know about Quantrill is part of myths and stories. And depending upon whether someone was sympathetic to the Confederate cause or a staunch Unionist, it also influenced the view and description of Quantrill. Was he an outlaw or a celebrity?

You are invited to the Inlinkz link party!
Click here to enter
Posted by Kristen of A Mom's Quest to Teach at 11:37 AM