Blogging Through the Alphabet: C is for Civil War Books 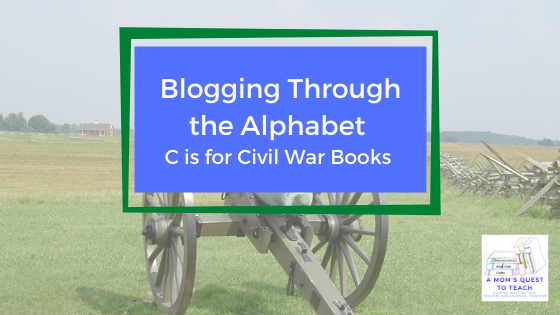 There are so many books to choose from if you wish to read more about the American Civil War. You could start with The War of the Rebellion: A Compilation of the Official Records of the Union and Confederate Armies (all 127 volumes!), also called Official Records (OR), to read primary source material and then jump into history books, biographies, fictional books, edited diaries, compilations of weird but true stories, and more! What are a few books about the American Civil War that sit on my bookshelf? First, let me admit that I have not read through each book I am going to share with you. To pick which ones I wanted to share, I simply took a handful off the shelves, snapped a few photos, and dug into the books.

This is a small sampling of the books one can read to learn more about the American Civil War. You could narrow down your approach to picking books if you wanted to specialize in one topic or another. For example, you could research and read books that only discuss slavery, the 13th-15th Amendments, Northern or Southern generals, one specific battle, one specific regiment, or other topics. When it comes to studying history, there are so many wonderful options. 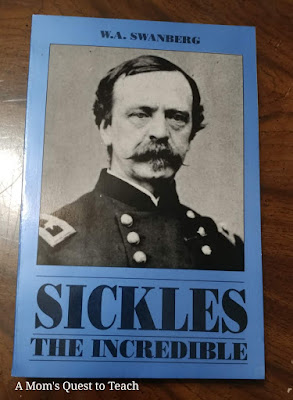 Sickles The Incredible by W. A. Swanberg

Daniel Sickles was usually surrounded by gossip. Before his nomination for brigadier general, he found out that some felt he would march his brigade to Jefferson Davis' side. So, he went out to win over the opposition. Sickles always put his whole heart into any project.

Any purchases you make through links to the books may provide me with a small commission at no cost to you. 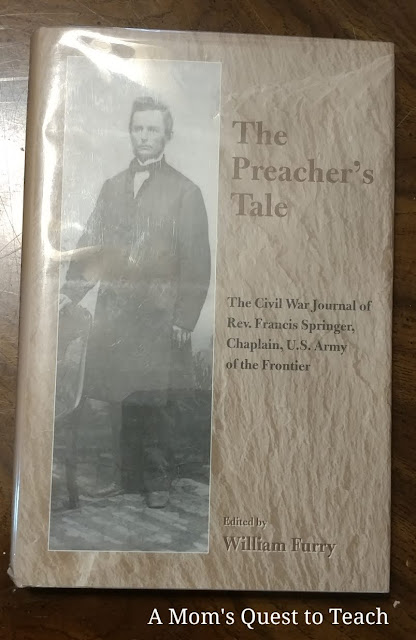 Reverend Francis Springer served in Arkansas during the American Civil War and through to the beginning of Reconstruction. In this book, Springer not only wrote about the events but also reflected upon them. This is extremely helpful as it helps people understand life as it was during the time period the journal or diary was written. For example, On November 7, 1863, at Fort Smith in Arkansas, he wrote of "The Two Societies." He explained that Civil Society was one where men were at home with their family, and everything was subject to their own will and desire. Military Society was one in which the men were not free to do what they wanted. There was always the "clatter of arms, rumbling of wagons, the roll of the drum" that was the background noise to their loss of freedom (95).

You may recognize the name, Jeff Shaara. He is the New York Times bestselling author of Gods and Generals and The Last Full Measure, which complete the trilogy his father, Michael Shaara, began with The Killer Angels. With these books, father and son bring the history of the American Civil War to life. With this book, readers will learn tidbits of history they might not be familiar with, may find conclusions they disagree with, and help you take away "something enormously valuable" when you visit these sites.

The book looks at the following battles (to learn about the battles, please click through the links): 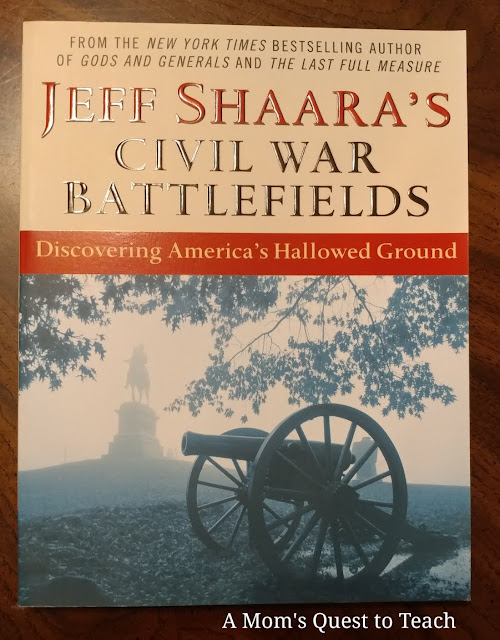 I also want to briefly mention two more books from two individuals whose works can found on multiple shelves in my home. James M. McPherson, who I have referenced and quoted previously, wrote Crossroads of Freedom: Antietam to describe the events that led up to this pivotal battle on September 17, 1862, the battle itself, and its aftermath. If you are interested in the American Civil War, McPherson has a variety of books that might suit your needs.
The Second Day at Gettysburg is a series of essays on Confederate and Union Leadership edited by Gary W. Gallagher. If you are looking to dive into one specific day, it is always interesting to find books and essays on Civil War battles. Part of the reason why I picked up this book is that I read the letters of a Civil War soldier from Pennsylvania who died on the second day of the Battle of Gettysburg. The other reason is that I thoroughly enjoyed the lecture series by Professor Gallagher on the American Civil War and other works he has authored and edited.
As a student and teacher of history, I love delving into all the different aspects of different time periods. Looking at the military events, famous and not-famous individuals, the locations of the battles, and specific battle details hour by hour is very enjoyable and educating. I love flipping to the end of many of these books and reading through the endnotes to discover more books to read. There is so much to learn! 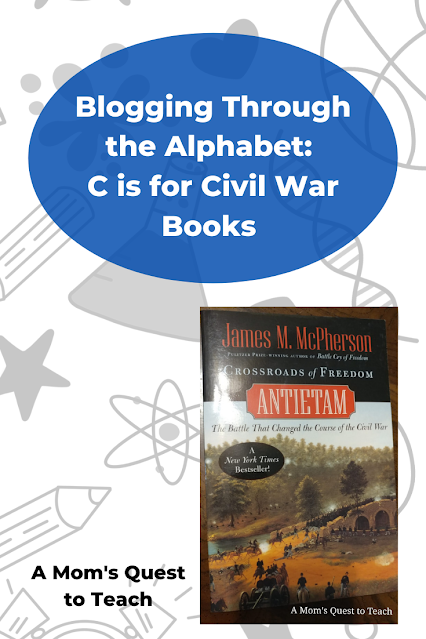 If you want to join Blogging Through the Alphabet, please visit:
Desiree @ Our Homeschool Notebook
Chareen @ Every Bed of Roses
Posted by Kristen of A Mom's Quest to Teach at 9:30 AM