Blogging Through the Alphabet: D is for Devil's Den 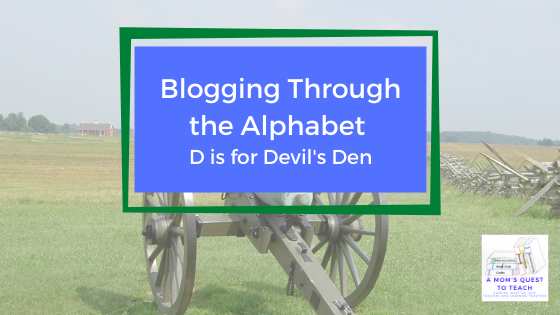 If you have studied the Battle of Gettysburg or visited the National Military Park, you may be familiar with the area known as Devil's Den. But why is it called by this name? Where specifically is it located? What lore is associated with this place before and after the American Civil War?

There is little evidence to suggest that the area known today as the Devil's Den was known by that name prior to the Battle of Gettysburg. There are several places where it is referenced as such after the battle, including:

Why Is It Called Devil's Den?

The very appearance of the place could be the reason why people gave it that nickname. It is wild and rocky and appears desolate and sinister. There are a host of reptiles, including snakes that live in dens among the rocks. There is even a story of one large snake named Devil, who lived among the rocks. Keep in mind, though, that local residents have refuted that it was called Devil's Den prior to the battle. 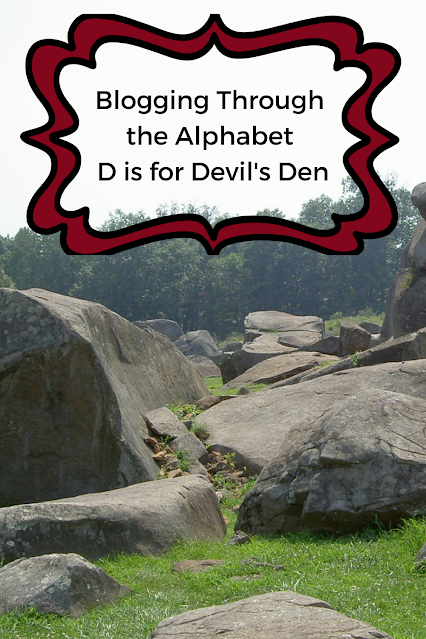 Where Is Devil's Den?

There has been much discussion over the years as to the specific location. Was it the boulders, a cave or cavern, the outcroppings of the rocks, or the spring?

The naming and exact location matter little in the formation of memories after the battle. On the evening of July 2, 1862, there were blood-stained boulders in the area. The Army of the Potomac and the Confederates fought to gain control of the area during the day, and in the evening, the bodies of American men – both dead and dying – were amongst these giant rocks. There was death and suffering in the area.
After the Battle of Gettysburg was over, the people visiting Devil's Den on July 4, 1863, found many "Rebel" sharpshooters among the rocks - forever holding their rifles but shooting no more. Many were given burial near the Den due to the nature of their bodies' decomposition. If one visits the area today, you can probably imagine the many locations that might have provided coverage for a brief time for these sharpshooters.
There are many interesting points and facts about Devil's Den. Among the many rocks, there are carvings from the early years after the American Civil War, and sometimes there is even modern vandalism that needs to be cleaned and removed. Visitors may leave trash, stack small rocks, or leave behind graffiti. As the Park Service is attempting to keep the area as close to what it was like in 1863, it is sad to see the remains of modern visitors.
In addition to the physical memories, there are also some false ones associated with Devil's Den. There is a famous photograph known as "The Dead Sharpshooter." This famous image is often printed in history books but without the notation that the Confederate soldier was not killed - did not die - at that spot in the photograph. He was killed about 70 yards away and was moved by the photographer. The photographer created a stunning but fake picture of a "Rebel" sharpshooter by manipulating the truth.
When visiting Gettysburg, I always enjoy spending time visiting Devil's Den. You can see the daring as they try to climb over all the rocks and boulders, as well as those who are reading the various carvings in the rocks. And if you are lucky, you can find a quiet spot to reflect upon those who died in that location fighting for their country. 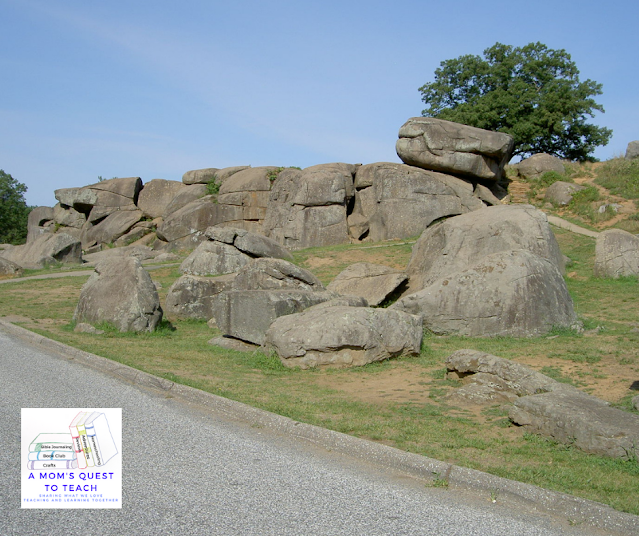 Do You Want to Learn More About the American Civil War?

Read more about the Battle of Gettysburg in this Blogging Through the Alphabet Post.
If you make a purchase through one of these links, I will receive a small commission at no charge to you.
If you want to join Blogging Through the Alphabet, please visit:
Desiree @ Our Homeschool Notebook
Chareen @ Every Bed of Roses
Posted by Kristen of A Mom's Quest to Teach at 11:32 AM