U is for Unrestricted Submarine Warfare (Blogging through the Alphabet) 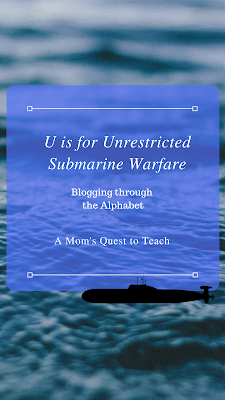 So why did the United States enter World War I when Woodrow Wilson seemed so adamant in the early years that America remain neutral? Wilson even went so far as to request citizens remain neutral in thought as well as deed.

There were a number of reasons why the United States was tied more closely with the Allies than with the Central Powers including:

Prior to World War I, the Royal Navy of Great Britain had ruled the seas but the German Kaiser Wilhelm II wished his own German High Seas Fleet to be as strong. Both sides continued to increase their Naval programs and build new ships (such as the Dreadnought).

After World War I started, the Royal Navy instituted a blockade to not only keep German ships in port but also confiscated food and raw materials that were going to Germany. After almost a year, the Germans struck back by using submarine warfare. Their nation was suffering shortages and introducing rationing so they needed to find a way to counter the British blockade. The German submarines, known as U-Boats (short for Unterseeboot or undersea boat), began attacking enemy ships and sinking them. 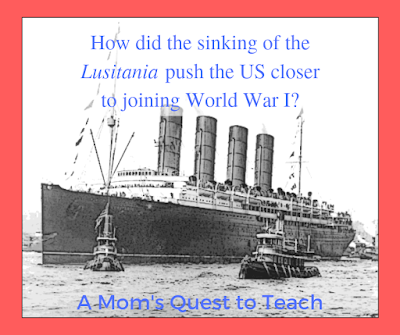 Unfortunately, a U-boat torpedoed the Lusitania on May 7, 1915. The British ship was carrying 1,200 men, women, and children and 128 American passengers drowned. Even though the Germans stated the Lusitania was carrying war material, this action led to protest in the United States and very nearly a declaration of war by President Wilson. Because Germany did not want the United States to join the war with the Allies, they stopped using unrestricted submarine warfare.

Following the change in how the Germans used the U-boats, shortages continued to worsen in their nation due to the British Naval blockade. On January 31, 1917, Germany returned to the policy of unrestricted submarine warfare. They hoped to break the blockade and eventually knock Britain out of the war entirely. They were willing to risk the entrance of the United States into the war. The Germans also had over 200 more U-boats than they did in 1915. This seemed like a more plausible plan.

Wilson broke off diplomatic relations with Germany but he still wanted to continue a policy of neutrality. During 1916, Wilson promoted the idea of "peace without victory." Yet, the sinking of any ships in the Atlantic war zone (neutral or Allied) and the release of the Zimmerman telegram, led to the nation turning against Germany. On April 6, 1917, the United States declared war on Germany.

So while unrestricted submarine warfare was not the only reason why the Untied States entered World War I, it was one of the decisive factors in deciding upon declaring war.
Posted by Kristen of A Mom's Quest to Teach at 12:30 PM