Movie Review of Life With Dog – Hope Comes in Many Forms 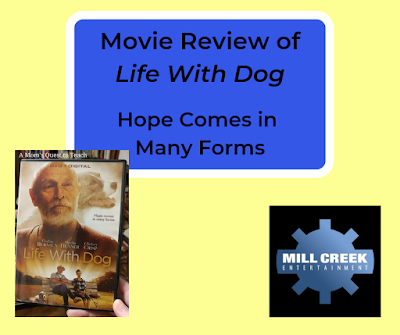 It is nice to be able to sit down and watch a movie with my husband that is uplifting and entertaining. We recently watched Life With Dog from Mill Creek Entertainment. It is an interesting movie to review because even though it is a story about a man who loses his wife and is left without faith, there are some laugh-out loud moments that help lighten the tension. Personally, I felt the entire movie (106 minutes) held my attention and when I needed to leave the room, we paused it because I did not want to miss a moment. 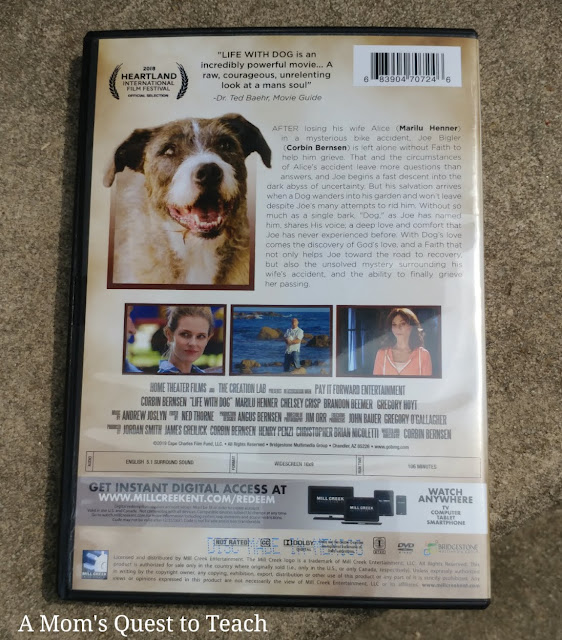 Description from the back of the DVD we reviewed:


"After losing his wife Alice (Marliu Henner) in a mysterious bike accident, Joe Bigler (Corbin Bernsen) is left alone without Faith to help him grieve. that and the circumstances of Alice's accident leave more questions than answers, and Joe begins a fast descent into the dark abyss of uncertainty. But his salvation arrives when a Dog wanders into his garden and won't leave despite Joe's many attempts to rid him. Without so much as a single bark, "Dog," as Joe has named him, shares His voice; a deep love and comfort that Joe has never experienced before. With Dog's love comes the discovery of God's love, and a Faith that not only helps Joe toward the road to recovery but also the unsolved mystery surrounding his wife's accident, and the ability to finally grieve her passing."

I was previously only familiar with Corbin Bernsen from his role in baseball movies of the late 1980s and 1990s and his work on a law television show. I was very surprised by Bernsen's acting in the movie. I really felt like he was Joe and was living the sad months after his wife's death.

I really didn't know that Bernsen has acted in and produced about a dozen faith-based films over the past ten years. So it was a very pleasant surprise to see him as the lead in the movie that he also wrote and directed. Not for one minute was the movie overshadowed by my preconceived notions of who Bernsen was based on previous characters he had played. This for me is a big win in recommending a movie because sometimes there are actors who can't get away from previous roles. They are truly typecast but I do not think Bernsen has that to worry about – at least from this viewer. 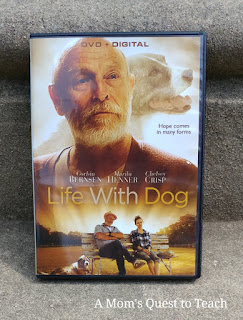 Even though I knew who Marliu Henner was prior to watching the movie, I was not overly familiar with her as an actress. I enjoyed the brightness and honesty her character, Alice, brought to the movie as she conversed with Joe. It is almost a shame that the tale takes place after her death so we could not see more of Henner in the movie.

Even though I like movies, I am more a fan of older movies so I was unfamiliar with the other actors  and actresses. For example, Chelsey Crisp plays Zoey, Joe & Alice's daughter, and I don't recall seeing her in any movies but she did a wonderful job of trying to be there for her dad while still giving him the space he may need after her mom died.

Overall, I felt the acting was very good. For example, when Norman is being questioned by Joe, we can feel his anxiety and nervousness in the situation.

Finally, let me mention Dog played by Monty. He arrived at the perfect time in Joe's life. A companion that Joe needed even if he didn't want to admit to it himself. Dog came in through a few bent/broken fence pieces and ingratiated himself right into Joe's broken heart. Dog (Monty) is quite a lovable animal – the perfect animal companion who brings closure to the story. 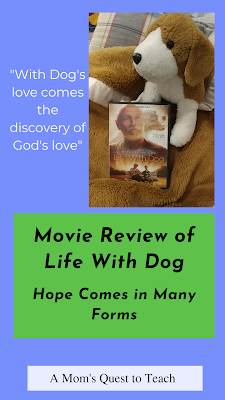 The entire movie is set in and around the home of the Biglers which a development company wants to purchase. This potential buying of the house is integral to the choices that Joe makes during the movie and are part of what gets him in trouble multiple times. He even thinks the development company may be linked to his wife's death.

The background music was perfect for the movie. It did not distract from the plot nor drown out the voices of the actors. There were no numbers with lyrics which is a nice change of pace from most movies.

Throughout the movie Joe speaks with his deceased wife, Alice. The moments are usually to help propel the story along as something big is happening in Joe's life. She isn't actually there and we really don't know if Joe thinks he is physically seeing her, just remembering previous conversations and making up new ones, or we are just seeing a visualization of his imagination.

When rewatching the movie, I see how the very opening scenes provide the viewers with so much information about Joe and his family. From the boxing gloves sitting on the bureau to a photograph of children, I can see in a second viewing a lot of foreshadowing and storytelling told in a mere few minutes.


Some of the information that was revealed regarding Joe Bigler and his family prior to the death of his wife was very saddening. We learn that his daughter Zoey had a twin brother who died. During the telling of this tale to the Pastor, Joe explains how he turned to God for help for his son but was not heard. His prayers were unanswered a second time when he prayed over his wife's hospital bed.

It was during this meeting with the Pastor, who Joe was seeing because he promised his daughter he would, we learn a lot of information as to why Joe feels the way he does in regards to God and religion. Sadly, I see many who feel this way regarding unanswered prayers and God. I think this makes Joe an even more realistic and believable character. 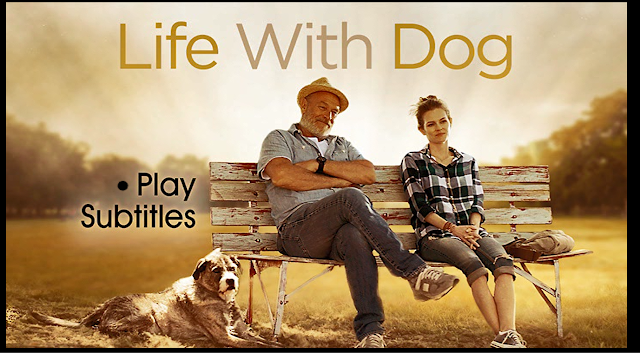 
I admit that at the end of the movie – when the credits started to run – I was upset. I wanted a bit more closure. What happened to Joe? How could they leave the movie like that? Was I supposed to come to my own conclusion whether or not he found faith again? Nope...we did get an ending that appeared on the screen shortly after I voiced my concern to my husband. See why we need to watch till the end of the credits?

One of my favorite parts is the beginning of the movie when we see what Joe and Alice's home looks like after her death and prior to her death. The dirty dishes in the sink, mail piling up, dead flowers in the vase are all signs that I have seen before in the lives of people close to me. I think the difference between the darkness in the house and the light, cheery nature when Alice is shown in the home is a very accurate way to demonstrate how people's lives can change with death.

I also do not know if I feel that the Dog adequately represented "His voice" as implied on the DVD jacket. I know that the Dog taught lessons to Joe throughout the movie – just with a simple look that caused Joe to rethink what he was or was not doing – but I do not think it was overtly sending a message from God. Perhaps that is due to the nature in which Corbin Bernsen chooses to send his messages. In reading a few of Bernsen's interviews, he states he does not want to make 'preachy movies' but instead ones where people are figuring out their connection to God. That is a big part of what Life with Dog is all about – Joe figuring out his connection and relationship with God after the death of his wife.

Would I recommend Life With Dog? Yes, I would recommend it. I do not think young children should watch the movie as there are some scenes where Joe is very upset and angry, punches the wall, and threatens a representative from the development company and a banker. However, I did not have any problem handing the movie to our teen and asking him to watch it. I think it all depends on personal choice and a teen's level of maturity.

And what did my husband think?

As a widower himself, he felt Bernsen's portrayal of a grieving husband was both accurate and heart wrenching. My husband quoted from C.S. Lewis' own reflections in his book, "A Grief Observed," who wrote, "No one ever told me that grief felt so like fear." Bernsen's acting conjured that sense to my husband and he wondered whether Bernsen even knew of the book or not. Either way, he said the actions of Joe were believable.

If you are interested in picking up your own copy, you can do so starting June 4, 2019 at Walmart. It is also available via other sites including Amazon.

If you would like to learn more about Mill Creek Entertainment, please visit the following:

If you are curious as to what other members of the Homeschool Review Crew had to say about Life With Dog, please visit our review link up. 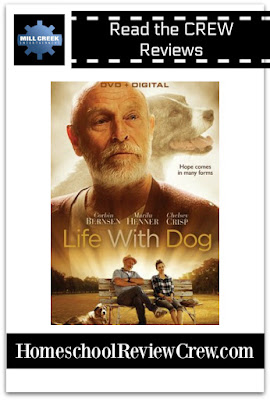