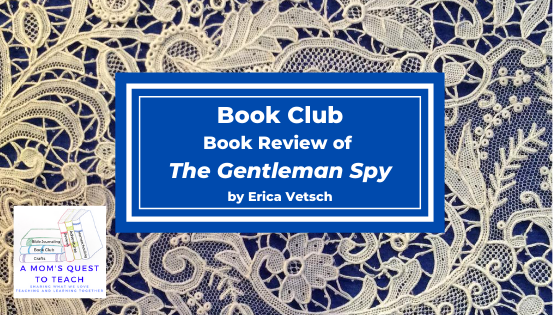 I received a FREE copy of this book from the publisher in exchange for my honest opinion. I was not required to write a positive review nor was I compensated in any other way. This post contains affiliate links. For more information, please see my Terms of Use and Disclosure Policy page. Thank you.


An unexpected death leads to a mother pushing her son to marry quickly to secure the title with another heir. But The Gentleman Spy is not eager to let someone into his life who might compromise his important position with the royal government. So, just what is the Duke of Haverly to do? Will he find a bride that will fit into one of the neat little compartments that organize his life? Or will love truly cause problems for his occupation? 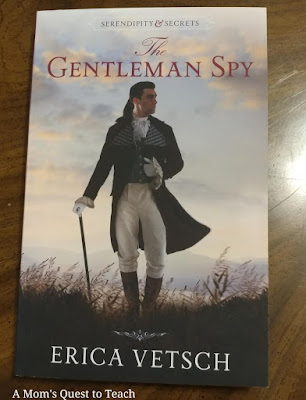 In the second book of the Serendipity & Secrets series, Erica Vetsch shares the story of Marcus Haverly, the Duke of Haverly as The Gentleman Spy. In the first book, The Lost Lieutenant, readers meet Marcus as he quickly becomes the friend of Evan Elridge, the new Earl of Whitelock. (Please read my review of The Lost Lieutenant here: Book Review) We now see that Marcus has continued to help the government even though he is no longer serving as a soldier in the war against Napoleon. He is actually spying for the government and his boss in the operation thinks that his stepping in as Duke (after the death of Marcus' father and elder brother in a tragic accident) will be beneficial for espionage. In fact, Sir Noel St. Clair thinks along the same lines as Marcus' own mother: Marcus should get married and quickly. 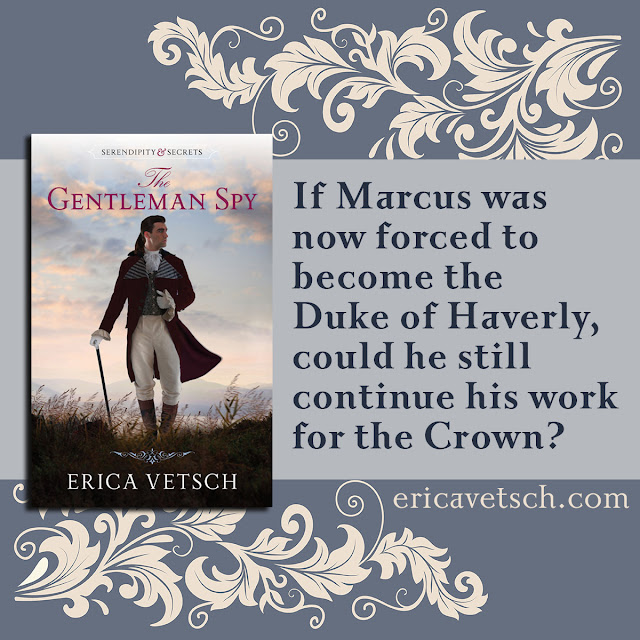 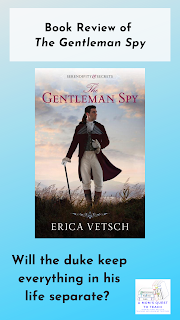 At the other end of this Regency Romance is Lady Charlotte, daughter of the Earl of Tiptree. Lady Charlotte's life is not easy because her father controls her life—and her mother's—very tightly. Both her parents are ready to send her off to a maiden aunt as a companion because Lady Charlotte has not gotten married yet. They see her becoming a spinster. Lady Charlotte does not wish to attend to her mean-spirited aunt but yet does not see how anyone will want to marry her. She dresses like a frump and too often speaks her mind even when she should not. Her vocal ways often cause her problems with those who are deemed important in society and by her parents.

Through a matter of interesting circumstances, Marcus and Charlotte meet and their lives seem to intertwine together whether they want them to or not. During one of the very first chance meetings, Charlotte begins falling in love with Marcus (even though she doesn't know it is him at the time). At this meeting, Marcus also begins to see how beautiful Charlotte is and—if he would admit it—begins to fall in love with her himself.

Much like in The Lost Lieutenant, marriage is quickly thrown upon the main characters through unusual circumstances. From one unexpected marriage proposal to another surprise proposal, Charlotte finds herself engaged to Marcus. The people surrounding the two newly betrothed are shocked, angered, and calculating. Marcus' mother is described as looking "as if she'd swallowed a goose egg and it had gotten stuck halfway down" (106). Luckily, Marcus did not allow Charlotte to release him from the engagement and they married. It seems like a perfect marriage if only Marcus was able to keep every part of his life in separate boxes. 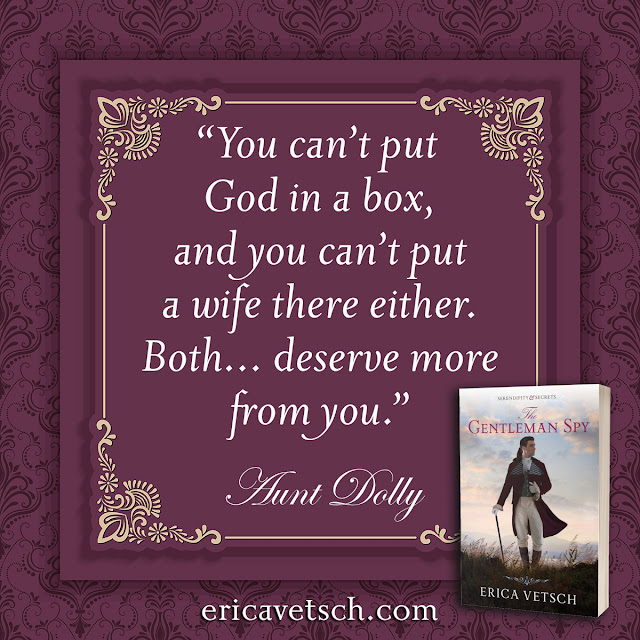 
I really enjoyed reading The Gentleman Spy. I found it to contain a bit less historical details than The Lost Lieutenant but was nevertheless still enjoyable as a work of historical fiction/romance. I love the descriptions of the characters and events in the book. For example, after the wedding announcement is printed in the newspaper, Marcus arrives at Charlotte's home and Vetsch writes this wonderful sentence: "Mortification heated Charlotte from her core to her fingertips, a prickle raced across her skin, and a hollow feeling opened in the pit of her stomach" (119). Before Charlotte (or Marcus) could call off the engagement, her parents had the betrothal publicly announced. What a potential scandal!

I would recommend The Gentleman Spy for those who enjoy historical fiction, Christian romance, or Regency romances. While I do not think you need to read the first book in order to enjoy The Gentleman Spy, you might want to do so before meeting Evan and Diana in this novel. And I am looking to see what adventures will be shared in the third installment in this series.

My one note is this: This book does involve prostitution and the evils that befall the women who participate in it at the hands of their callers. Both Marcus and Charlotte make it their mission to try and help these women find their way out of the awful profession. We read how both are personally connected to several women including Aunt Dolly who becomes instrumental in guiding both Marcus and Charlotte towards marriage as partners and friends.

About the Author - Erica Vetsch


Erica Vetsch is a New York Times best-selling and ACFW Carol Award–winning author. She is a transplanted Kansan now living in Minnesota with her husband, whom she claims is both her total opposite and soul mate.

What does Erica Vetsch have to say about the role of faith in the lives of Marcus and Charlotte?


"Marcus tries to keep his faith in his “faith box.” Church on Sunday, theological discussion Sunday afternoon, but God doesn’t bleed over into his work and responsibilities . . . until Charlotte lands in his life.

Charlotte was taught at a private girls’ school where she developed her love of books, and one teacher in particular had a significant influence on Charlotte’s spiritual life. This teacher taught her that there was more to faith than church attendance and trying to be a good person. She needed to have a personal relationship with her Creator and His Son. Charlotte struggles with wondering why a God who says he gives good gifts to his children would extend that goodness to her. And she struggles with her father’s duplicity. He is pious when he’s with others, but he’s mean-spirited and a philanderer behind the scenes." 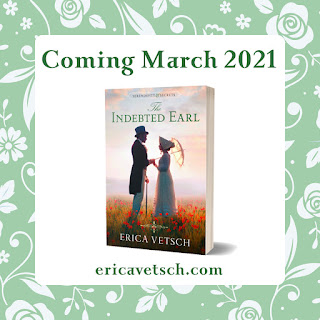 Posted by Kristen of A Mom's Quest to Teach at 3:01 PM