Blogging Through the Alphabet: N is for Names 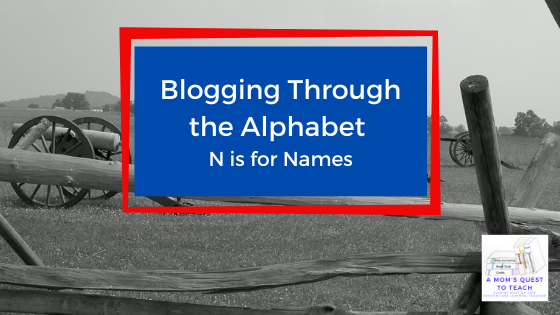 The American Civil War has many famous names – people, places, battles, events, and more. Most people who have studied American history are familiar with people like Clara Barton, John Wilkes Booth, Ulysses S. Grant, Jefferson Davis, Robert E. Lee, and Abraham Lincoln. They may even be familiar with the battle of Gettysburg and Sherman's March to the Sea. But what about the lesser-known names of the American Civil War?

Clara Barton – nicknamed "The Angel of the Battlefield." She was an American nurse who founded the American Red Cross.

Jefferson Davis – The President of the Confederacy

Robert E. Lee – One of the most admired Confederate generals.

Battle of Gettysburg – The turning point of the American Civil War; when the Union forces stopped the Confederate advancement North.

Sherman's March to the Sea – This military campaign was intended to evoke fear in the citizens of Georgia and the South during the American Civil War. 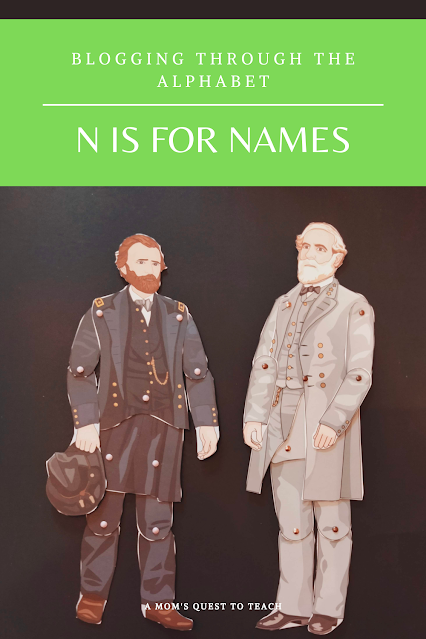 Do You Know These Names?

John Brown and Harpers Ferry – John Brown, a controversial abolitionist, launched an attack on Harpers Ferry, VA (now in WV) on October 16, 1859, to rally the local slave population to his cause.

Dred Scott – Enslaved man who sued for his freedom and the freedom of his wife. He claimed that since he lived in a free state and free territory for several years, they were free. Unfortunately, the court decided in Dred Scott v. Sandford that he was not an American citizen so he could not sue.

Bleeding Kansas – Also known as Bloody Kansas or the Border Wars, Bleeding Kansas refers to the often violent confrontations between those supporting slavery and those in favor of abolition in the Kansas territory and the surrounding territories and states.

Fort Sumter – Located off the coast of the South Carolinian city of Charleston, Fort Sumter is where the Civil War officially started when the Confederates began a bombardment on the Union fort.

Battle of Bull Run (or Manassas) – Two battles took place in Manassas, VA. The first battle fought on the fields received two names because the North tended to name the battles after physical features (like Bull Run Creek) while the South tended to name the battles after nearby towns. The first battle, fought on July 21, 1861, demonstrated that the Civil War would not be a short one.

Pickett's Charge – On July 3, 1863, General George E. Pickett, along with other Confederate generals, led an attack as the high water mark of the Confederacy at the Battle of Gettysburg. This attack occurred in the afternoon and saw about 12,000 Confederate troops attacking about 6,000 Union troops at the center of the Union line.  Historians continue to debate whether this should be seen as the great charge it has been depicted as in movies.

What About These People and Events of the Civil War?

Irwin McDowell – Graduating from the United States Military Academy in 1838, McDowell would go on to teach tactics at the school, serve in the Mexican-American War, and would receive the rank of Brigadier General at the start of the American Civil War. He was defeated at the first Battle of Bull Run, would eventually be tasked to protect Washington D.C., and then be transferred to the Pacific theater.

Battle of Ball's Bluff – This battle on October 21, 1861, has been called an accidental battle. General McClellan wanted to identify where the Confederate troops were after they had abandoned Leesburg, so he sent General Charles Stone with a scouting party. A mistake, a delay, and the death of a Union Colonel led to the Union being driven across the Potomac River and losing the battle.

Braxton Bragg – The North Carolinian would attend the United States Military Academy, graduate in 1837, serve in the Second Seminole War, the Mexican-American War, and eventually become a Confederate general. Even though he was well-liked by Davis, his temper and personality led him to be disliked by others in the Confederate army.

Rose O'Neal Greenhow – This Southern Woman, born in Maryland, was a Confederate Spy during the American Civil War. Through her marriage to Dr. Robert Greenhow, she gained access to the elite of Washington D.C. She maintained a network of spies that spanned multiple states and consisted of fifty individuals. 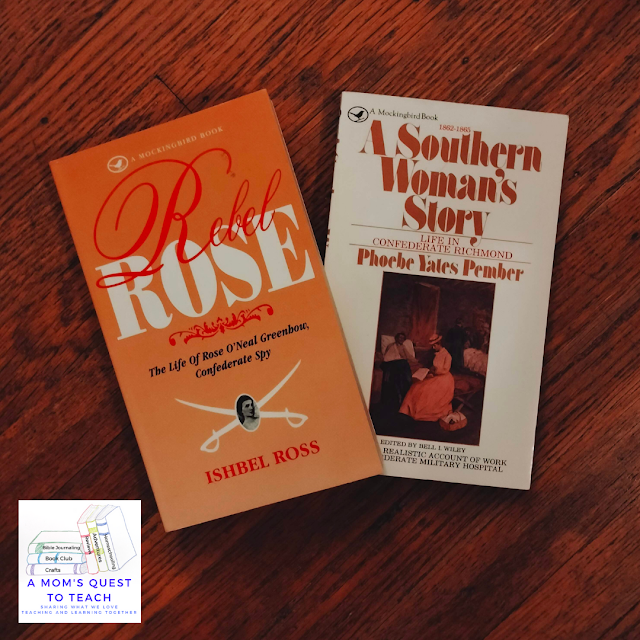 Studying the American Civil War opens so many opportunities to learn more. No matter what someone's interest, there is probably something to intrigue them. From studying military tactics (that teens can employ in their video games) to preparing traditional foods or playing popular music from the time period, we can make the 1860s come to life for our children. We can read biographies, research the weaponry used, examine the geography of the places where battles took place, or read the books published during the 1860s or about the time period. I love subjects that allow us to easily engage in them.

Posted by Kristen of A Mom's Quest to Teach at 9:11 AM