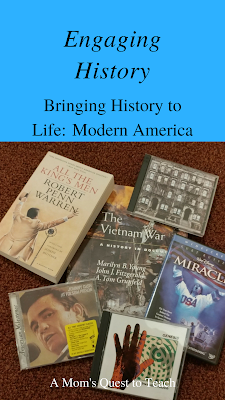 This post contains affiliate links. For more information please see my Terms of Use and Disclosure Policy page. Thank you.
History has always been one of my favorite subjects. During the presentation of ideas in my Engaging History series, I will provide activities, journal-writing opportunities and questions, ways to include geography, music, and literature in your lessons, and projects for your children to complete to help bring history alive. I urge parents to preview books, movies, and other resources and references prior to sharing with your children. Only you, as the parent, know what your children are ready to read or view in a movie.

Often in schools, the events past a certain point in American History are often skipped, abbreviated, or ignored – depending upon time constraints or teachers' personal preferences. When homeschooling, one can focus upon the entire history of their nation or just discuss what interests the child or children being taught. In this post, I will share several different books and ideas for teaching events and topics in post-Civil War American History (the event that usually divides US I and US II history courses in traditional school settings). 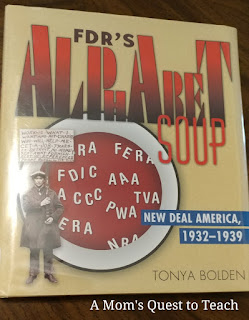 An interesting but sometimes overwhelming topic to teach is the New Deal of President Franklin D. Roosevelt following the Great Depression in America. One resource is FDR's Alphabet Soup: New Deal America, 1932-1939. While the book is not necessarily a place to start for children unfamiliar with the events and topics of the time period, it is a good resource which provides a lot of details, timelines, photographs, political cartoons, election buttons, and definitions. Tonya Bolden presents the first 100 days of FDR's presidency and more as she explains the various New Deal problems for ages 12 and up. 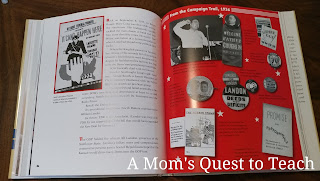 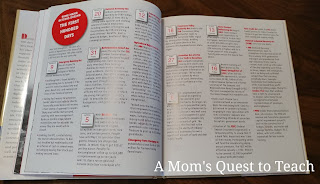 There are many different ways to study the presidents of Modern America. A simple way is to check out age-appropriate biographies from the library to read and review. 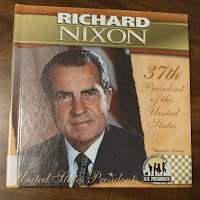 Since teaching the history of Modern America can often seem daunting – because there is a wealth of information you might want to teach your child, taking a look at individual citizens who impacted history is a good way to teach to their specific areas of interest while providing useful background information on the time period. The great thing about teaching from this perspective is that there are so many interesting people to study! And don't just study Americans...there are so many interesting people who impacted history from around the world.

Planning on studying the 1950s with a children who loves sports?
Do you have an artist or architect in the family?
If you plan on studying the Civil Rights movement, be sure to read biographies about Rosa Parks,
Martin Luther King Jr., John F. Kennedy, Lyndon B. Johnson, or Thurgood Marshall.

Franklin D. Roosevelt Presidential Library and Museum: Audio and Visual Collection
Addresses and fireside chats can be found, along with photographs and other useful information.

Time's The Long Story Behind Presidential Campaign Buttons and Pins
Provides a brief look at the history of presidential campaign buttons through the years.

The Official Site of the Hockey Hall of Fame


Please visit the links below to read more posts from the Homeschool Review Crew as we come together for the 5 Days of...Homeschool Blog Hop during the week of April 23, 2018. And make sure to stop back here each day this week for more great ways to bring history to life with books, movies, and more! 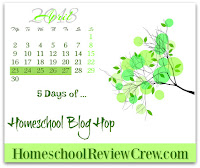