Reviewing Heroes of History: William Penn: Liberty and Justice for All from YWAM Publishing 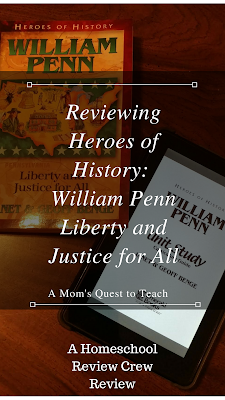 Living just a short distance from Pennsylvania helped me decide from all the wonderful books that YWAM Publishing offers in their Heroes of History and Christian Heroes: Then and Now lines. Our family reviewed Heroes of History William Penn: Liberty and Justice for All by Janet and Geoff Benge. We also received a Study Guide to go along with the book which provided discussion questions, vocabulary words, geography activities, and lots more to help teach our children about the life and times of William Penn. 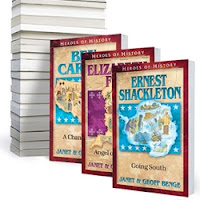 The Heroes of History is a biography series of 28 books recommended for ages 10+. In the Heroes of History series one will learn about explorers, pioneers, presidents, inventors, and more. Individuals that your family can read about include: Billy Graham, Harriet Tubman, and William Bradford. 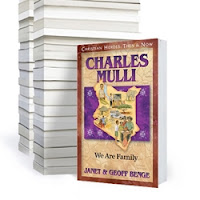 The Christian Heroes: Then and Now line has a total of 46 books recommended for ages 10+. "These books answer today's call for positive role models and for opportunities to see how God works through the lives of those who follow him" (YWAM Publishing). Personally, I am looking forward to reading books in this series in the future like that of C.S. Lewis: Master Storyteller and Eric Liddell: Something Greater than Gold. 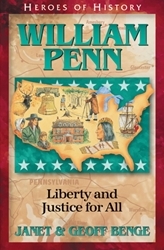 William Penn: Liberty and Justice for All is a well-written book that is enjoyable even for adults. The background history of England is provided without confusing the central story - the life of William Penn.

It is available in paperback, e-Book, and audiobook formats. William Penn: Liberty and Justice for All is also available in Spanish.

The story starts with William Penn in prison at the Tower of London and then takes us back to a time when his father, Admiral William Penn, was a national hero. While living in Ireland, 12-year-old William Penn heard Thomas Loe, a Quaker, speak at his father's estate. The idea that one could talk directly to God was spoken of and this provided relief for young William because he had been praying directly to God himself.

The story continues detailing the time William Penn spent attending Quaker meetings, writing tracts, and speaking at meetings. Unfortunately for Penn, much of the book details his legal proceedings as well as his time in and out of jail. Penn spent some time in the famous Tower of London while arrest under for "unlawfully and tumultuously" assembling even though all he did was lead a prayer meeting on a street corner. It was events like this that pushed Penn to founding Pennsylvania, named for his father, as a Holy Experiment where Indians would be treated as friends and there would be freedom for people to practice their religion.

The concluding chapters detail Penn's time traveling back and forth between Pennsylvania and England to work out problems regarding land ownership as well as problems that ensued with the changing of the monarchs in England. 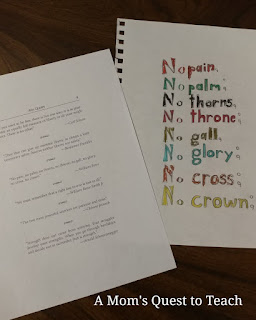 In each of the overviews, information is provided for using the Heroes of History Biographies and Unit Studies in a different setting; for determining what the role of the teacher, group leader, or parent can be; and for how to teach social studies and language arts using the Unit Study Curriculum Guides. Each book from the Heroes of History series can be used to study a specific time period, social studies topics, or character traits. William Penn: Liberty and Justice for All is set in the years 1644-1718, discusses the fight for religious freedom, colonial times, 17th-century religious conflicts and convictions, the Black Plague, and the histories of England and Pennsylvania. The two character qualities that could be focused upon are: tolerance and fairness.

Our teen attends public school, so we did not use as much of the Unit Study Curriculum Guide as I would have were he homeschooled (like his younger siblings). In addition to asking him to read William Penn: Liberty and Justice for All, he completed the fact sheet and timeline that accompany the Guide as well as tried his hand at fancy lettering with the key quotes listed in the Unit Study.

The Unit Study also includes ideas for a display corner – objects that relate to the times and places in which William Penn lived. We were able collect a number of the items suggested, including facsimiles of colonial money, a copy of the Bill of Rights, books on London, and books about people who lived during the time period. The collection of these items provides great opportunities to discuss other subjects while reading the book about William Penn. 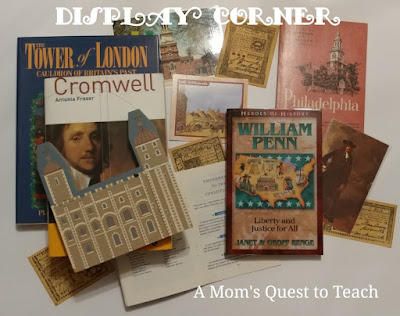 With our younger son, who is soon turning five, I introduced some of the terms and vocabulary used in the book to practice writing and teach him new words. And because he loves maps, we labeled the blank map of Pennsylvania that was provided. 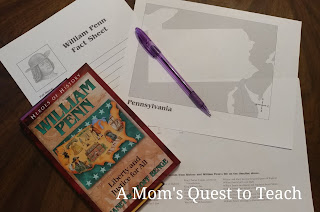 In addition to ideas for a display corner, the Unit Study provides a chapter explaining different ways students can further explore the biography. "Student Explorations are a variety of activities that are appropriate to a wide range of learning styles." If your children enjoy writing, there are essay questions and creative writing ideas such as writing letters, journal entries, or even a resume for Penn. For children who prefer more hands-on projects, one could create a topographical map of Pennsylvania, write a one-act play about an event in Penn's life, or try calligraphy to write the charter of Pennsylvania.


One of the things I liked the most about the Unit Study Curriculum Guide is that there are four chapter questions provided that relate to vocabulary, factual information, comprehension, and one question that seeks "an opinion or interpretation."

A great aspect is that you could use the entire Heroes of History series as your core curriculum for US History such as by reading at least one biography from each time period and completing the accompanying activities provided in the Curriculum Unit Studies. Or your child could read more than one book from a time period to gain multiple perspectives such as reading the biographies of Ronald Reagan, Louis Zamperini, and Billy Graham from the time period of The Future of a Nation.

Our teen really likes the fact that William Penn: Liberty and Justice for All was told in a sequential order with very little sidetracking to discuss different times. He found the book easy to understand and comprehend and enjoyed the way the book was organized.

In the Unit Study Curriculum Guide, there is a list of other biographies of William Penn that might be of interest. Accompanying each biography is a synopsis and comments on the book. This is very useful in seeking out additional information.

I would recommend William Penn: Liberty and Justice for All for families, youth groups, and schools who wish to learn more about Penn, England during the late 1600s, and Colonial America.

To read reviews of some of the other books in the Heroes of History and Christian Heroes: Then & Now Series, please visit the Homeschool Review Crew.