U is for U-2 Incident (Blogging Through the Alphabet) 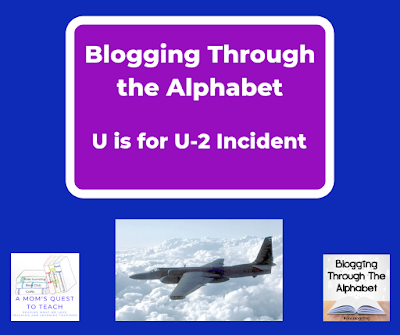 The years after World War II were full of tension and ripe for conflict as nations tried to find a new normal after the destruction of many European and Pacific countries. Of particular interest for students of American history are the relations between the Soviet Union and the United States in the late 1940s into the 1950s. There were periods of calm to extreme tension as diplomatic relations fluctuated during the presidency of Eisenhower. One of the events that led to extreme tension was the shooting down of a U.S. spy plane over the Soviet Union—the U-2 flown by Gary Powers.


On May 1, 1960, Powers was on a top-secret mission to photograph military installations in the USSR. The plan was that he would fly from Pakistan to a landing zone in Norway after a nine-hour flight. When flying over Sverdlovsk (present-day Yekaterinburg, Russia), a Soviet surface-to-air missile exploded near his plane. A second missile made a direct hit and the U-2 plane began to fall from the sky. Powers bailed and floated towards the earth. He was surrounded by Soviet forces. 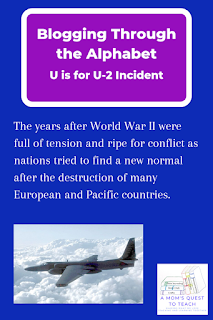 Soviet Premier Nikita Khrushchev announced that an American spy plane had been shot down four days after the incident calling it an "aggressive act" by the United States. As the US did not believe that much of the spy mission was left after the crash, they said that it was merely a weather plane that had accidentally flown off course and was shot down. On May 7, Khrushchev proved that this was false as he produced a photograph of Powers, imprisoned, and evidence recovered from the wreckage of the plane. Powers was alive in Moscow and had testified where he had taken off from (Peshawar in Pakistan) and that he worked for the U.S. Central Intelligence Agency.

It was now evident that the U.S. had been conducting regular spy flights over Soviet territory. Eisenhower took full responsibility for the flights but this meant that Khrushchev denounced Eisenhower and several hours after the Paris Summit had started, the Soviets left.


Because of the U-2 incident, Khrushchev felt that he could no longer cooperate with Eisenhower. The Soviets also abandoned talks on nuclear disarmament in June. A new level of tension emerged between the U.S. and USSR in the final year of Eisenhower's presidency. This would lead to even more tension during the presidency of John F. Kennedy.

What happened to Powers?


As the higher-level world leaders discussed spy missions and flights, the man whose failed spy mission started the whole thing remained in a Soviet prison. He was put on trial for espionage and convicted and sentenced to 10 years of confinement. After approximately two years behind bars, Powers was exchanged in the first 'spy swap' between the U.S. and the Soviet Union in February 1962. He was exchanged for the Soviet agent Rudolf Abel.

Powers wrote about the incident in Operation Overflight in 1970. He worked for a Los Angeles TV station as a helicopter pilot until he died in a helicopter crash in 1977. Gary Powers was buried at Arlington National Cemetery.

You are invited to the Inlinkz link party!
Click here to enter
Posted by Kristen of A Mom's Quest to Teach at 1:28 PM