V is for Victory Garden (Blogging Through the Alphabet) 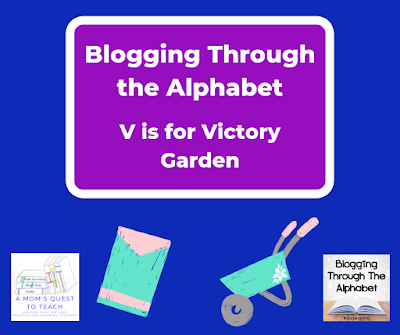 During both World War I and World War II, there was a food crisis in Europe as to how to feed the troops. Farmers enlisted and their farms were often turned into battlefields (whether intentionally or not). Who would feed the men who were serving on the two sides during both great wars? In both wars, the United States was able to step up and provide food for a variety of reasons.

To ease food shortages and supplement food rationing, many families grew victory gardens during the wars. Because the task of growing a garden was something kids could do, they were able to participate in the war effort on the home front. All available idle land was recommended to be utilized by citizens. So one might see fruit and vegetable gardens not only in people's front or back yards but also in school yards, parks, company grounds, or vacant lots. 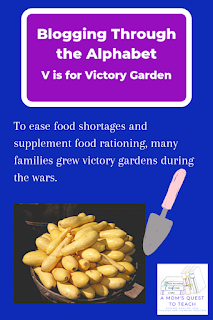 
One of the ways that the idea of planting a victory garden was promoted was through the use of propaganda. This means proved to be efficient for other things during the war effort so why not pushing a positive agenda like sowing "the seeds of victory." Private and public organizations helped promote the idea of planting one's own vegetable garden such as women's clubs and chambers of commerce.


Food rationing and the diversion of food stuffs for the military and troops in World War II, led to more victory gardens (as previously stated). People become even more creative in where to plant them, such as window boxes and patios for apartment dwellers. First Lady Eleanor Roosevelt even planted a victory garden on the White House lawn, although she did not tend the garden herself.

Of the foods planted, the following were among the most popular: beans, beets, cabbage, carrots, lettuce, peas, carrots, tomatoes, and squash. Of course, depending upon where someone lived and the time of the year, different crops would also be planted. It was possible to have three gardens: spring, summer, and fall/winter gardens depending upon the crops chosen. The excess food was able to be canned and used in the winter to supplement breakfast, lunch, and dinner.

Whether people grew victory gardens for economic or patriotic reasons, the growing of fruits and vegetables at home did help commercial farmers provide for the troops overseas, put additional food on the table during the time of rationing, and bring people together as a nation. Perhaps it even influenced the more modern movements of sustainability and self-sufficiency.


Read more history-themed posts at A Mom's Quest to Teach 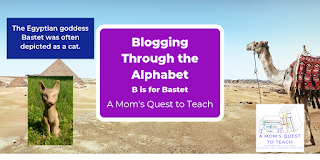 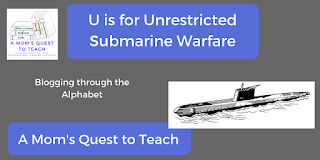 Join Blogging through the Alphabet 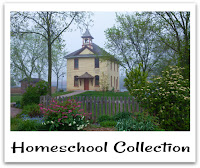