X for XYZ Affair (Blogging Through the Alphabet) 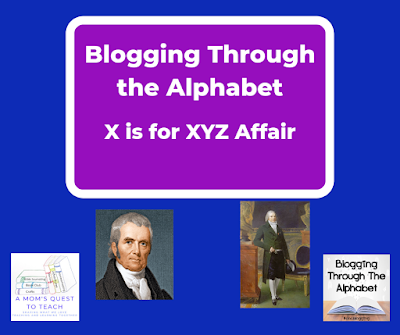 While writing my W is for War of 1812 post, I discovered two more topics for the Blogging Through the Alphabet Series. Many of the events and incidents of the late 1700s and early 1800s are not the focal point of American history, including that of the XYZ Affair. This was a diplomatic incident between America and France in the 1790s.

France and Great Britain went to war in 1793. America had signed Jay's Treaty with Great Britain in 1794 to settle differences between the US and Great Britain.  Jay's Treaty upset the French because they felt it violated agreements between France and the United States. So France signed a policy into effect in 1796 that allowed the French to seize American merchants ships. President John Adams sent three envoys to speak with the French foreign minister. These three envoys would be approached by four intermediaries of the French government who would become known as W, X, Y, and Z. 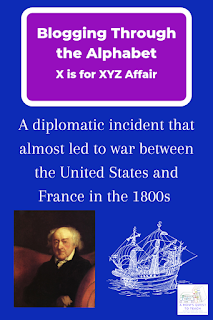 Why were there problems between France and the United States? There were numerous issues going on with trade during the late 1700s and early 1800s as France and Great Britain fought wars and struggled to be the superior force on the sea. And with the French Revolution, Reign of Terror, and changing French governments, the opinion of France in the United States was also changing. Many, including President Adams, thought France to be the center of decadence and intrigue. There was also difficulties as there were many factions within the political arena of France during this time that made negotiations difficult for America.

In order to try and settle affairs between the United States and France, President Adams sent Elbridge Gerry, Charles Cotesworth Pinckney, and John Marshall to meet with the French Foreign Minister, the Marquis de Talleyrand. This meeting was not to take place until after several conditions were satisfied according to Nicholas Hubbard (W), Jean Hottinguer (X), Pierre Bellamy (Y), and Lucien Hauteval (Z).


What were the Demands of XYZ?


The French would meet with the Americans, Gerry, Pinckney, and Marshall, if they agreed to several conditions. The French wanted a low-interest loan. They also wanted the US to pay American merchant claims against the French. And finally it was requested that the US pay a bribe to Talleyrand. History has it that Pinckney said, "No! No! Not a sixpence!"

The French did not really want all these demands but Talleyrand wanted to delay matters so that he could secure his own political position with the Directory (who was running France at this time) and increase his own wealth. Talleyrand also wanted to only work with Gerry who he felt would be more sympathetic to the French. The XYZ agents did not want things to escalate as they had business interests in the United States but things were changing for France.

The demands changed, even though France had won several important victories in the war in Europe and threatened war on the US if they didn't concede. The American envoys were not budging so Talleyrand let go of most of his requirements and met with the American men.

Both Pinckey and Marshall planned to return to the United States, while Gerry remained in France to continue pushing for a peaceful resolution. While the preparations of Pinckey and Marshall were going on, their dispatches reached President Adams. When information regarding the demands was found out by Congress, they wanted to read the dispatches. Adams prepared for war and had to release the diplomatic correspondence but replaced the name of the French agents with W, X, Y, and Z. In preparation for war, Congress authorized the foundation of the Department of the Navy.


President Adams continued to prepare for potential war with France but did not openly declare war. Talleyrand realized what was at stake and attempted to restore relations between France and the United States. During this time, Napoleon came to power (Talleyrand was still foreign minister), and both the US and France wanted to avoid war. Eventually a treaty would be ratified on December 18, 1801 which would settle the hostilities between France and the United States.