Z is for Zhou Rule Changes (Blogging Through the Alphabet) 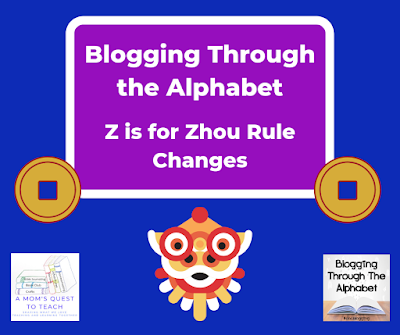 In the last Blogging Through the Alphabet series, I shared an introduction to the Zhou Dynasty of China. Today, I would like to delve a little deeper into how their ruling system changed that led to their having less power.

Even though the Zhou people overthrew the Shang people, they did not completely do away with them or their ways immediately. The ways of the Shang were actually incorporated into the Zhou Rule.


One of the changes instituted by the Zhou was moving away to a new area and a new capital. They moved the center of the state to their own homeland and built the capital Xian Yang. This city and its design would become the standard for city design for future dynasties. 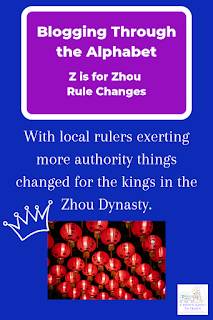 Local  administrators were of different types: members of the royal family, military leaders, and (over time) these local rulers were the descendants of original appointees. As time progressed, local rulers wondered why they were sending money and their allegiance to the Zhou royal court. Eventually, these local rulers even called themselves king. It was also during this time the Qin people began causing problems for the Zhou.

Little by little, the Zhou kings lost control of territory—local rulers ruled independently and set up their own rituals and customs. The Zhou kings had no real power and things changed again in China.


In past series I wrote about Confucius, the Boxer Rebellion, and the Qin Dynasty.

Want to Join Blogging Through the Alphabet?

Posted by Kristen of A Mom's Quest to Teach at 2:54 PM