Book Club: Book Review of Venturing with God in Congo 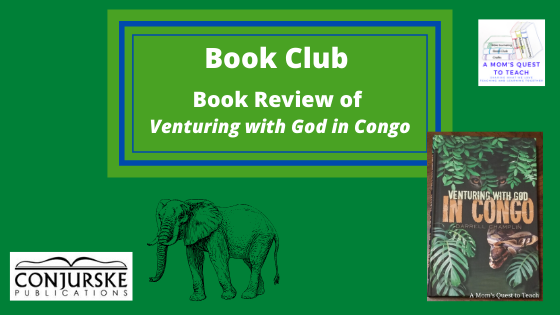 Disclaimer: I received a FREE copy of this product through the HOMESCHOOL REVIEW CREW in exchange for my honest review. I was not required to write a positive review nor was I compensated in any other way.

On a few occasions, I pick a book to read and review based upon a cover. This was the case with my desire to review Venturing with God in Congo by Darrell Champlin published by Conjurske Publications. It is a beautiful hardcover book with an intriguing cover that makes one feel like they are in the jungle with the missionaries as they share the Word of God. And when you flip through the book, you will find illustrations of various African animals on the pages at the end of the chapters. 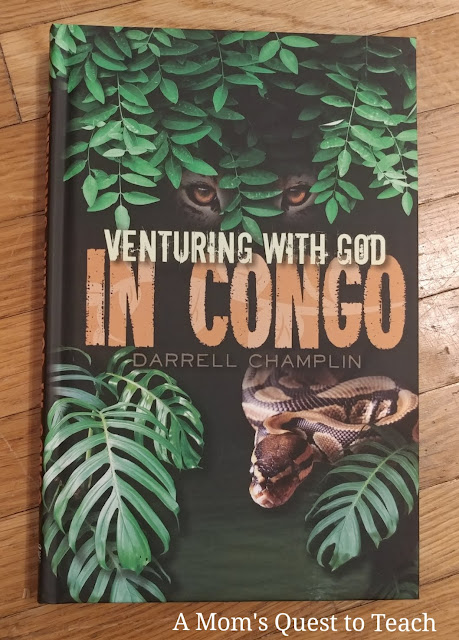 What is the Story About?


Venturing with God in Congo is the story of missionaries bringing the word of God to those living in the jungles along the rivers of Kasai and Lukenie in Congo. The stories told mostly occur from 1954 to 1964 and, in general, the chapters can be read almost independently of each other. Darrell Champlin introduces us to his family, their journey to their mission at Nkole Nkema, and their experiences while ministering to the natives of Congo.

As the story is set in Africa, there are a lot of tales involving animals and the necessity to killing those animals to survive. A few of the photographs are even of animals that Champlin killed such as the rogue elephant, a python, and a cape buffalo. The stories regarding elephants, pythons, and other hunting expeditions are detailed in various chapters. Through the chapters we also learn how they traveled either by bicycle or truck on the uneven roads and stayed in the rest houses of the small villages. In some villages they were quite welcome, while in others, like Ongo, the Gospel was rejected (at first).

As I said, you can read most of the chapters independent of each other but—if there is a connection—notation is made either with a small explanation at the beginning of the chapter or with a footnote referring to the corresponding chapter where you can learn more about the story. For example, in the chapter, "Independence: Congo Style," readers are referred to the chapter, "Bima! Bima! Irene Ferrel," to read more about the history of Congo and the independence from Belgium.

I really enjoyed reading Venturing with God in Congo. I found it to be an informational, uplifting, and a wonderful account of the lives of missionaries, specifically those in Africa. I would recommend it to those who seek to know more about the lives of individuals who are bringing the message of God around the world. It is very well-written and easy to understand. I could see it working quite well as a read aloud for families with slightly older children than we have (four-year-old and six-year-old). I will be asking our teenage son to read it when he is done his current religious studies course because I think it is very eye opening. 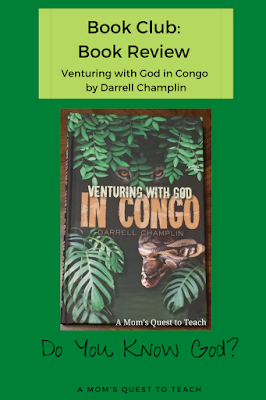 There are many specific things I appreciated about the book's messages. I love the point that was being made when discussing how the people of Africa are different from those who live in America. There are many who feel that missionaries should not be going into different worlds and trying to change those people. After all, those individuals have their own religions. Champlain's response is: "They also have their own medical systems...so why do you champion better health care for them?" I love this point. If people object to missionaries changing tribal peoples, then where do we draw the line? Just with religion? I feel that after reading the chapter called "The Little People in the Phonograph," I think I am better equipped to justify missionaries now.

In addition to being better equipped to explain the importance of missionaries, I also came to the realization that it is a lifestyle I do not think I could lead. Besides facing Congo natives who were not friendly, Champlin and his family also lived with a great variety of insects (including ants that could eat a person's home to nothing), ate a poor diet (which was supplemented with Champlin's hunting of native animals), lacked easy access to medical care (reading the birth tales was scary), and faced many more difficulties.

I appreciate the fact that many of the chapters begin and end with a quotation or reference from the Bible. On more than one occasion, the inclusion of the Bible quote led me to putting down Venturing with God in Congo and picking up my own Bible. Books that encourage thinking behind the book are great. One specific example occurred at the end of the chapter about Mark's illness. Champlain quoted Jeremiah 33:3. The family called upon God and He answered.

My only problem with the book came with the consistent calling of venomous snakes as poisonous snakes. Champlin writes of killing "poisonous snakes" in their home. He even devotes a chapter to his wife's fear of them ("Killing a Poisonous Snake A Missionary Wife's Way"). There is no such thing as a poisonous snake as they are not dangerous to eat. They are classified as venomous as they inject their venom into victims through biting. This does not distract from the book at all. It is a personal pet peeve of mine but one that may annoy others who are into animals and zoology.

I would recommend Venturing with God in Congo for those who enjoy reading Christian non-fiction, stories about missionaries, and those seeking to open their eyes and the eyes of their families to the world around them. 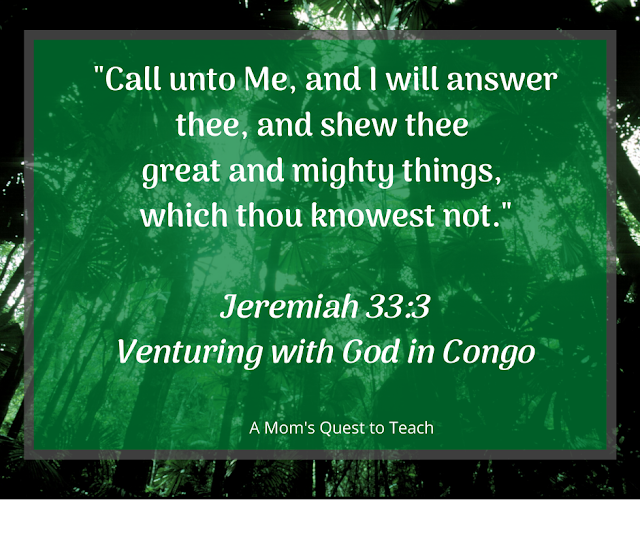 With the high quality of Venturing with God in Congo, you might be interested in learning more about the publisher. Conjurske Publications has a simple mission: "to reprint the greatest Christian literature from the past several centuries and present it to Christians across the globe today." One of the keys to their mission is providing quality books that will "satisfy the desire in each of us to hold, read, and possess beautiful books" and I feel they completely fulfilled that goal with Venturing with God in Congo. Personally, I will be looking at their books to see what else they offer to add to our bookshelves.

And don't forget I wasn't the only one reading Venturing with God in Congo. The Homeschool Review Crew had the opportunity to read and share the book in their homeschool.