W is for Wheeler (Blogging Through the Alphabet) 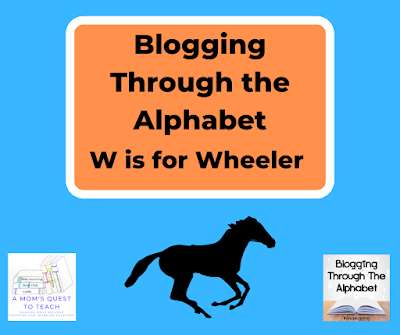 Joseph Wheeler was born into a family from New England in Georgia. He would go on to join the Confederacy when they seceded in 1861. During his time in the Confederate army, he participated in hundreds of battles and skirmishes. After the American Civil War, he continued to serve the nation by serving 8 terms in the House of Representatives as a Democrat and participating in the Spanish-American War in 1898.

Before the American Civil War


On September 10, 1836, Joseph Wheeler was born in Augusta, Georgia. After the death of his mother, the family moved back to Connecticut but only stayed a few years as financial circumstances forced Wheeler's father to move the family back to Georgia. Joseph Wheeler stayed in Connecticut to continue his education and then eventually was admitted to the U.S. Military Academy at West Point in the class of 1859.

After graduating near the bottom of the class of West Point, he was sent to New Mexico to serve as an officer in the Regiment of Mounted Rifles. During his time serving there, he earned the name "Fighting Joe" while fighting skirmishes with Native Americans.


Time During the American Civil War 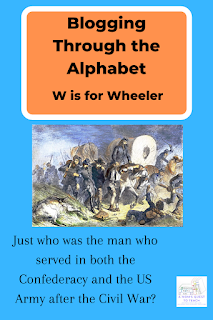 After starting out as a first lieutenant of artillery, Wheeler was appointed colonel of the 19th Alabama Infantry, then promoted to chief of cavalry of the Army of Mississippi, then brigadier general (in October of 1862), then major general (in January of 1863), and then in 1864, he was promoted to lieutenant general.

One of the factors that played into his promotion was his work building coastal defenses at Pensacola Bay. He drew the attention of General Braxton Bragg, who had him promoted to colonel. As colonel, Wheeler would build forts and help train recruits. Wheeler later proved his worth again at the Battle of Shiloh. He led his regiment to cover the retreating Confederates on the second day.

Wheeler was also active leading the rearguard after the battles of Perryville, Stones River, and Chickamauga. He continued to lead the cavalry to cause disruption and problems against the Union. While Sherman was leading his own attacks, Wheeler had his cavalry in action against the Union almost continually during the Atlanta Campaign and the March to the Sea.

He was captured in Georgia in 1865 as he was providing cover for Jefferson Davis' flight from Richmond, VA and remained at Fort Delaware until his release on June 8, 1865.


Wheeler eventually settled in Alabama after the war and became a cotton grower and politician.  He was elected to Congress in 1881. He would go on to serve eight terms in the House of Representatives. He would try to position himself as a moderate between the Republicans and the Independent Democrats who were supported by small farmers. While serving, he tried to bridge the gap between the North and the South and rebuild the Southern economy.


President McKinley appointed Wheeler a major general of volunteers when war broke out in 1898. He would receive command of the unit that was charged with the invasion of Cuba. The engagement he took part in on June 24, 1898 would be important because it got rid of the threat of enemy troops that might interfere with landing operations as well as clearing the way to Santiago. (Allegedly when the Spanish began to retreat, Wheeler cried out "We got the damn Yankees on the run!" Could this be due to the fact the Wheeler was 62 years old, or that old habits die hard?) After this attack at Las Guasimas, he fell ill but did participate in the battle of San Juan Hill and provide advice for the U.S. forces. 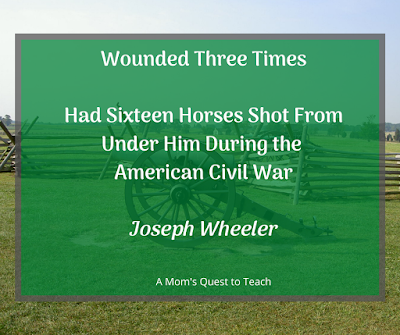 After the Spanish-American War


Wheeler commanded the Camp Wikoff at Montauk Point on Long Island, New York. He was commissioned a brigadier general in the regular army in June of 1900 but resigned only a few months later.

He was the only Confederate corps commander to hold the same position in the United States Army. I find it so interesting that he was able to serve both the South and then the North after the American Civil War. It is also of note that when former Confederate General James Longstreet saw Wheeler in his U.S. Army uniform, he said that he hoped he would die before Wheeler so he could be there (in the afterlife) to see Confederate General Jubal Early cuss out Wheeler for being in a blue uniform when Wheeler himself arrived (last of the three). I can't help but wonder how today's world views Joseph Wheeler's place in history.

You are invited to the Inlinkz link party!
Click here to enter
Posted by Kristen of A Mom's Quest to Teach at 12:53 PM