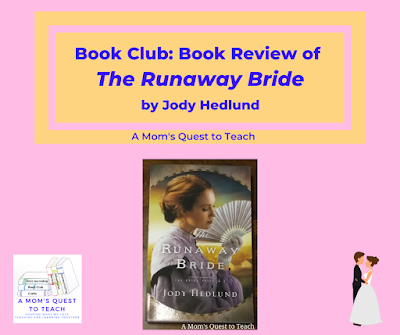 Disclaimer: I received a FREE copy of this book from the publisher in exchange for my honest opinion. I was not required to write a positive review nor was I compensated in any other way. This post contains affiliate links. For more information, please see my Terms of Use and Disclosure Policy page. Thank you.

The Runaway Bride by Jody Hedlund is second in The Bride Ships Series. At first, I was concerned because I had not read the first book in the series, but I quickly learned that I could thoroughly enjoy the story of Arabella without having read A Reluctant Bride. In this work of Historical Fiction, Hedlund takes us to British Columbia right after a smallpox outbreak. We see the results of the outbreak on the Native American population and how they are treated. Amidst this drama is the tale of Arabella and her attempt to be a gentlewoman seeking a marriage appropriate to her social standing.

What is the Story About? 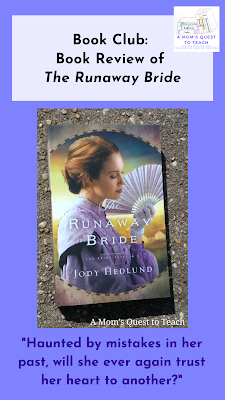 As one may guess from the lovely cover image, the story is about one woman's journey in the late 1800s to find a marriage of higher social standing. Arabella Lawrence arrived on the Tynemouth bride ship along with other women who were seeking a new life through marriage in Canada. The ladies who were on the bride ship ranged from the various classes of life in England. So some were quickly married off, some had jobs lined up for themselves almost right away, while others had more difficulty finding a suitable marriage for whatever reason.

From the very first chapter, Arabella meets the two men that will be at the center of her marriage dilemma: Lieutenant Richard Drummond of the Navy and Peter Kelly, the town baker. If Arabella were simply to pick the man who would most likely allow her to live according to the social standing she was used to, she would pick Drummond but Peter is not content to let Arabella go. Peter fell in love with Arabella from the first moment and even though he has a past full of mistakes, he has set his sight on living the best he can according to God and the guidance of Pastor Abe.

During the story, we are introduced to a host of other characters including the natives of British Columbia, the settlers who were living there prior to the landing of the bride ship, and those from the past lives of Peter and Arabella. We also get a peek into the life of a baker in the 1860s as well as the interactions between different social classes.


I really enjoyed how Hedlund incorporated the flashbacks from Arabella's past to explain just why she escaped on a bride ship to British Columbia. I think the book was better suited to life in the 'present' rather than starting with Arabella's life in England and then following her across the ocean on the ship itself. I think the story moved more swiftly by starting with her arrival at Vancouver Island.

I think Hedlund has done an excellent job of bringing to life the 1860s in British Columbia. I almost felt like I could smell the bread being prepared and baked by Peter and his assistants. I enjoyed joining Peter and Arabella on their canoe trip to see more of the natural wonders of the area. And I wanted to learn how to bake all the yummy cakes right alongside Arabella.

My only problem with The Runaway Bride is with the explanation of the treatment of the Native Americans after the smallpox outbreak. Whether or not the Navy was responsible for the spread of the disease, I tend to read events like these with a bit of skepticism because there is often the desire to look at the past using today's standards and opinions. So perhaps, people who helped the natives were treated like Peter Kelly was in the book (I added this topic to my list of things to read more about in the future).

Would I recommend The Runaway Bride? Yes! Those who enjoy Christian romance and historical fiction would enjoy reading about how Arabella finds courage in God and how Peter mended his ways to find God himself. I look forward to picking up the first book in the series and reading the third when it is released.

I am including The Runaway Bride as part of my AtoZ Reading Challenge!