A Review of Three Selections from the Award-Winning Author Carole P. Roman 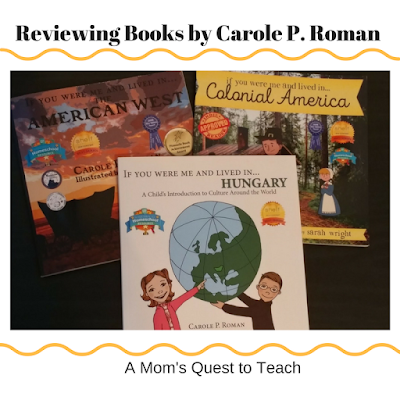 We reviewed the following three books:

If You Were Me and Lived in...Hungary: A Child's Introduction to Cultures Around the World

If You Were Me and Lived in...Colonial America: An Introduction to Civilizations Throughout Time
illustrated by Sarah Wright

If You Were Me and Lived in...the American West: An Introduction to Civilizations Throughout Time
illustrated by Paula Tabor 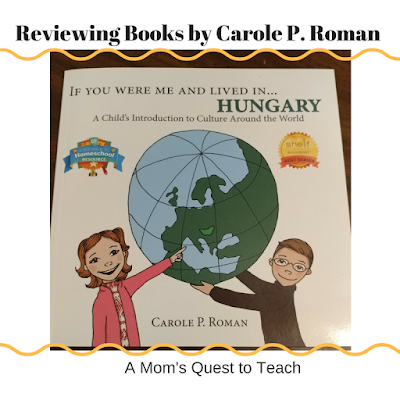 If You Were Me and Lived in...Hungary: A Child's Introduction to Cultures Around the World, introduced our children to the sights and sounds of modern day Hungary. We learned about the capital, Budapest, names for different members of the family, vacation spots, food, holidays, sports, and even the inventor of the Rubik's cube.

I think one of my favorite parts of the book was that there was a pronunciation guide not only in the back of the book but also with the naming of each Hungarian word on each page. For example, while discussing food at your grandma's house, the pronunciation for Nagyi (Na-dges) or grandma, goulash (goo-lash), and paprika (pap-reek-ca) is all provided within the story's text making it really easy to read aloud to your children.

Our four-year-old son liked learning about the different names of of children living in Hungary - like Lazlo or Erzse-bet. Our two-year-old daughter liked the picture of the children in front of the Hungarian Parliament. I think she really liked the little boy and girl smiling at her.

The book opens many conversation topics - one of which was talking about how our family has enjoyed goulash and other meals that are seasoned with paprika. Another conversation we had was about water polo and handball, both of which we enjoy watching during the Olympics. 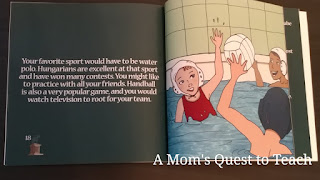 Both books in the If You Were Me and Lived in...An Introduction to Civilizations Throughout Time series, were longer than If You Were Me and Lived in...Hungary: A Child's Introduction to Cultures Around the World, so we spread those out to more than one sitting with our two- and four-year olds. A ten- to eleven-year-old history-loving child would have no problem reading through these entire books in one sitting, though. 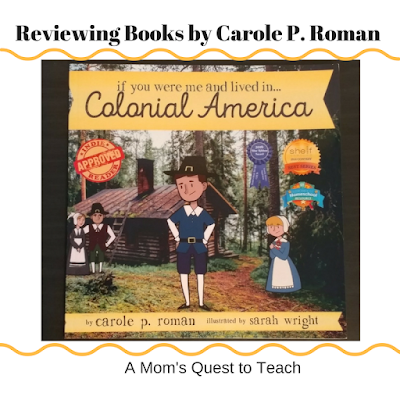 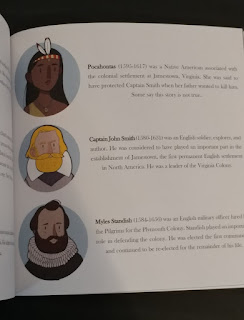 If You Were Me and Lived in...Colonial America: An Introduction to Civilizations Throughout Time, introduced our children to the world of pilgrims and settlers who arrived in America on the Mayflower. We learned about their journey to America, how they built their homes (with wood, daub, and wattle), and their daily lives (tending chickens, mending, cooking, or working in the fields).

Our four-year-old son's favorite part was where the little boy made friends with the Native American boy who taught him about fishing, while my two-year-old daughter liked the part where the family faced their first December in America. In fact, she kept finding that picture and saying "Brrr, they are cold."

Personally, I can't wait to re-read this book during November as we talk about Thanksgiving. It will provide a great anchor for lessons about Plymouth and the first Thanksgiving. With the vocabulary provided as well as the brief biographies of historical figures, our family has lots that we can learn from this book by Carole P. Roman. 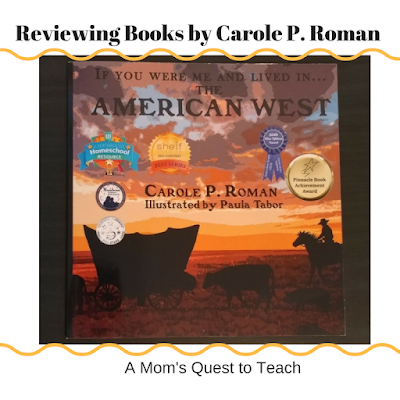 If You Were Me and Lived in...the American West: An Introduction to Civilizations Throughout Time, our children journey with Carole P. Roman and Paula Tabor as they took us on a journey across America to Oregon.

When we started looking at the book, If You Were Me and Lived in..the American West, my son and I talked about maps of the United States so we could plot the journey of the settlers. In fact, I think that would be the only change I would make to the book - add a map showing the trails - but then again our four-year-old is a map enthusiast so it might just be a feature that only our family would appreciate. 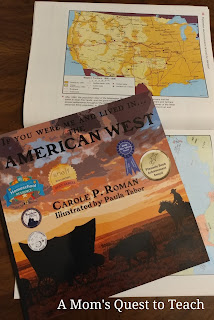 Our four-year-old son's favorite part was learning how the family crossed the rivers they encountered - the Platte and the Columbia Rivers. Our two-year-old daughter's favorite part was hearing about the different foods they brought with them on their journey. And they both liked hearing about the gathering of buffalo chips! I think my favorite part of If You Were Me and Lived in...the American West were the details regarding how each day was spent by the children and parents. Being able to compare our daily activities to those of early settlers is a plus for this history-teacher-turned-homeschool-mom.

All three books present so many opportunities for families to create individualized lessons for their children. For example, I used the vocabulary list from the American West book to introduce my four-year-old to new words. We talked about blacksmiths, bonnets, outhouses, and homesteads among other vocabulary words and practiced writing and spelling them. If our children were older, I would probably have them create their own model of a Conestoga wagon and perhaps even sew their own period-appropriate clothing. Our son did draw his own Conestoga Wagon with a bit of guidance from me after we read the book.


I would recommend If You Were Me and Lived in...Hungary: A Child's Introduction to Cultures Around the World to families with children as young as our two-year-old daughter. While children ages seven to nine may be able to read the book independently, younger children can listen or read along with their parents or older siblings and learn about places and cultures around the world. I think this book would be a great place to start when discussing the geography of Europe.

I recommend the If You Were Me and Lived in...An Introduction to Civilizations Throughout Time series of books to families with children four-years to twelve-years-old. These books are more detailed with a plethora of vocabulary, people, places, and events to interest young students of history. They are fantastic additions to any family's library because of their attention to detail. And because they are written from the perspective a child who lived in that time period, your own children feel as if they are right alongside their new friends in the past.

There is only one objection I have in regards to the books (other than the lack of maps but, as I said, we are a map-loving family): each book that we reviewed is told from the perspective of a boy. (Information is provided for the lives of both boys and girls and moms and dads, but – when reading the stories.

Edit: The two history books we reviewed are told from the perspective a boy but there are others in the series (If You Were Me and Lived in...Elizabethan England for example) that are told from a girl's point of view. And after a quick re-read of If You Were Me and Lived in...Hungary, I now see that it is told from the point of view of both children narrating the tale.

To read more about books by Carole P. Roman, please visit this review from 2020.

To learn more about the Carole P. Roman books and collections please visit the following: